The Ejército Revolucionario de Liberación a.k.a. "the Guerrillas" a.k.a. The Peoples Revolutionary Army of San Esperito (PRASE) is an para-military faction in Just Cause (1).

They're the main force opposing Salvador Mendoza's government in San Esperito. They are led by José Caramicas, who is arrested before the events of game. An alliance between The Agency and the guerrillas is formed after the mission Breakout, in which Rico frees Caramicas from the El Grande Fort. They're also in an alliance with the Rioja Cartel, who opposes both the government and the Montanos they support. Their Faction color is green.

Theoretically after liberating all the military bases, all the military vehicles in them should technically belong to the Guerrillas, but some military vehicles don't have their colors or logo changed after being captured like, the Rage-Johnston F6 Comet. It can be captured at La Perdida Military Base, but it will always spawn in blue and gray color and always spawn with the logo of the San Esperito Military, due to a lack of rebel sprites. 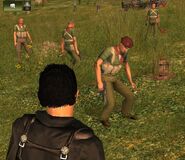 Guerrilla soldiers are visibly armed while driving.
Add a photo to this gallery

Delta 5H4 Boxhead, also used during liberations of the towns and cities.
Add a photo to this gallery

Vehicles exclusive of the liberationsEdit

Ballard M5B1 Scout, appears during Guerrilla liberations for towns, cities, or military bases. It is the most powerful Guerrilla land vehicle.
Add a photo to this gallery

Delta MAH-15 Chimaera. It is the most powerful Guerrilla aircraft.
Add a photo to this gallery 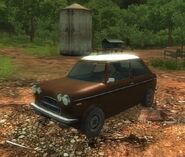 Jackson Z-19 Skreemer provided at Guerrilla safehouses.
Add a photo to this gallery 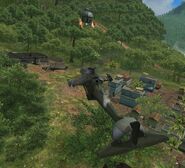 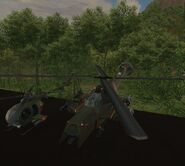 A mirrored version of the primary logo, seen on some vehicles with inverted decals, such as the Wallys GP.
Add a photo to this gallery

Locations of the safehouses in San Esperito. See also: Maps.
Add a photo to this gallery
Retrieved from "https://justcause.fandom.com/wiki/Ej%C3%A9rtico_Revolucionario_de_Liberaci%C3%B3n?oldid=158540"
Community content is available under CC-BY-SA unless otherwise noted.