The AH-33 Topachula is an armed helicopter in Just Cause 2.

This is a gunship best resembling the AH-1Z Viper or the Boeing AH-64 Apache with a rear-end similar to the Boeing Sikorsky RAH-66 Comanche. The cockpit bears a slight resemblance to the Kamov Ka-50 Black Shark. It is armed with missile pods and miniguns. It can be found in one of three color schemes, including desert, snow, and jungle.

The helicopter has an impossible design and could not actually fly in reality. The reason for this is the lack of the tail rotor. Without a tail rotor, the torque from the main rotor would cause the craft to spin uncontrollably. However, there are two types of real helicopters that do not need a tail rotor, but this helicopter is clearly neither, as those would need other components that are also not present on the AH-33:

The "AH" in this helicopter's name conforms to the US armed forces tri-service designation system.

This helicopter is slightly slower than the Sivirkin 15 Havoc (probably due to its size) but faster than the UH-10 Chippewa. Because of its slow rate of turn, it's best used in ranged attacks against bases. Its dual miniguns can not aim as low as the Havoc's. This makes it difficult for taking out ground troops and small objects. Its takeoff sequence is much more lengthy than those of the other two attack helicopters and you may get shot while waiting for it to complete. The Topachula has the same armor as the Havoc.

Notably, the Topachula can carry a LOT more weight than the Chippewa as it isn't built to carry passengers, yet has large and powerful rotors.

However, it can barely lift a Si-47 Leopard.

This helicopter is good at close and long-range attacks on military bases, though the player must descend in order to target low-lying destructible objects when performing close-range attacks. It works well for hit-and-run missions, as it can destroy virtually any destructible object within seconds, and can take a significant amount of damage from opposing forces as it makes its rather slow escape. It's very bad at close-range helicopter duels because of its painfully slow rotation speed, but at a distance, it can easily lay waste to oncoming aerial forces.

Overall, the Topachula is quite good, especially if the pilot knows how to compensate for its shortcomings.

These helicopters are very common in Military bases in Panau.

This Youtube video shows all of its locations: Link.

There is a mod at justcause2mods.com for this vehicle. Once installed, the vehicle armament will change from dual miniguns and dual rocket pods to 8 miniguns, 2 rocket pods, and even 2 autocannons. There is also increased speed and better maneuvering. Link here.

Near some village. If you look closely enough, you will see a resource item's symbol showing where it is from a very long distance away. The reason why is unknown. Usually when your signal beacon starts flashing with 5 bars will the symbol appears.

Alongside a UH-10 Chippewa at Lembah Firdaus after Paradise Valley.

One plus 2 UH-10 Chippewas in the foreground at some Communications Outpost.

A promotional screenshot from game developers.

One outside of Lembah Genting Tinggi. 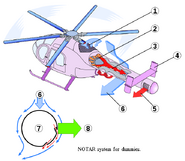 Scheme of the NOTAR system, which some people keep insisting is present on this helicopter, despite the obvious lack of the number 5 component.

One alongside an unarmed UH-10 Chippewa at some Communications Outpost.

At Kem Jurang Gurun. Contrary to what the picture implies, this vehicle does not spawn there.

One brought to Kem Singa Menerkam.

All three Panau Military attack helicopters. This is at center, while at left is a Sivirkin 15 Havoc and at right is a UH-10 Chippewa.

Modded AH-33 Topachula. The weapons appear to be kind of clipped into the sides.

Rear side view of the modded Topachula. 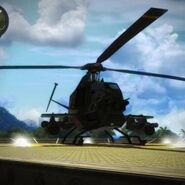 Another view of the modded Topachula.

An extremely damaged Topachula.
Add a photo to this gallery

Retrieved from "https://justcause.fandom.com/wiki/AH-33_Topachula?oldid=161572"
Community content is available under CC-BY-SA unless otherwise noted.