A Second Amendment is the second stronghold takeover that Rico completes for the Reapers in Just Cause 2.

This is the second stronghold takeover that Rico completes for the Reapers faction.

It's at a military supply depot, in the mountains of the Lautan Lama Desert. This south-western stronghold is heavily guarded, so make sure you enter the fight with good weapons and full magazines. Expect slightly more aggressive guards, as by now, you have surely rattled Panay's cage.

Bolo Santosi does not seem to be totally convinced of Rico's loyalty to the revolutionary cause and so decides to give him another test of loyalty. As stated in the Reapers info (in the PDA), the faction attracts new followers daily - people who wish to shake off the oppressive regime, laid down by Panay, take up arms and fight for a better government. The only difficulty is, that there aren't many weapons for them to 'take up arms' with. And so, Bolo asks Rico to guide a team of Reapers into the Kem Gunung Gurun Supply Depot and seize it, which will not only give the Reapers all the guns they need, but will also strike a serious blow to the government's weapon inventory.

As usual, Rico and the team of faction soldiers, are dropped near the stronghold entrance by a helicopter (H-62 Quapaw). Be sure to use the large rocks for cover, while approaching the gate. After you've killed the guards, grapple your way over the wall and open the gate from the inside. As usual, you'll have to fight your way through soldiers, on your way to the other side of the stronghold.

At one point, you will encounter a soldier manning a minigun. Kill him. After the minigun operator is dead, the technician will tell you to kill a nearby sniper. After killing the sniper, a brief moment will pass before a military jeep (Maddox FVA 45) shows up. Kill the two occupants. Once they are dead, another brief moment will happen before the gate to the inner compound opens, revealing another Maddox. Kill the occupants if you want, but the minigun operator at the mobile radar will destroy the jeep with minigun fire indiscriminately. Fight your way to the mobile radar.

Once you've taken control of that location, the Panau Military reinforcements will arrive, with two more Maddox FVA 45s and a SV-1003 Raider. Hold your ground, until the Reapers technician has finished his work at the mobile radar.

The stronghold commander at the end of this mission. He is wielding a Submachine Gun. Usually not something elites would carry.

Better close up.
Add a photo to this gallery 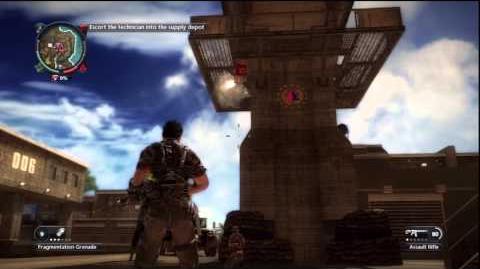 Retrieved from "https://justcause.fandom.com/wiki/A_Second_Amendment?oldid=153576"
Community content is available under CC-BY-SA unless otherwise noted.