Airport Troubles is a Roaches faction mission in Just Cause 2.

It's a short and easy mission to retrieve information for Razak Razman and the Roaches. Even so, this mission is a "stage completion", a type of faction mission that gives a bigger reward and during these missions the in-game clock is usually locked on a specific time. The mission also includes some odd destructables and rare vehicles. See listed below at the trivia.

Get out to Panau International Airport and contact Razak Razman from the phone booth to start this mission. He's a little annoyed that someone called Little Guy, a hacker in his employ has decided to turn evidence over to the authorities in exchange for a flight out of Panau to Korea (probably South Korea). You must retrieve the Roaches codes and passwords before Little Guy can flee the country.

Take the messy but direct route through the main entrance and the government troops, or instead go left around the hangar to the end of the runway and hop up right next to the hangar, where the pilot is. He's got company, so you'll have to take the lot out, then grab the PDA he drops.

There is also a less direct way to get in: go round the left side of the building, Grapple on top of the pilot's hanger and drop down from there to avoid a shoot out and subsequently lose ammunition.

Razak gets the information and then tells you that Little Guy is already on board the plane, waiting on the runway. Hijack it. It's faster to grab the nearby MV V880 parked in the hangar. The Cassius 192 that Little Guy is waiting in is across the arrival terminal on another runway. There are a pair of soldiers armed with rocket launchers right next to the Cassius and a few additional soldiers near a green Maddox FVA 45 with a Mounted Gun.

If the rocket launchers are troublesome, the easiest way to handle them is to approach the plane from the woods and use the nearby fence for cover.

The plane itself is very well armored. It's still unknown how well it could handle being hit with the rockets, but it can handle an unknown number of minutes of sustained fire from the mounted gun. There is also a chance that the plane is nearly invulnerable to damage from a.i. weapons, while the player can still destroy it. In any case, as long as the plane doesn't get hit by rockets and as long as the player doesn't use it as cover while fighting the other soldiers, there should be no problem. If the plane should get blown up at this point, then the mission fails.

Once the soldiers are taken care of (at least the rocket launcher guys), enter the plane and take off. Or just get in. When Little Guy realizes that you are working with the Roaches, he panics and offers the information you seek, in exchange for being released. When Razak receives the data your mission objective is complete and he tells you to do with Little Guy as you wish.

You can land back at the airport or abandon the aircraft. Either way, you never actually see Little Guy, as he doesn't exit the plane.

Main building of the Panau International Airport, seen from the road. The mission trigger is a phone booth near here.

The pilot is at a hangar at the corner of the airport.

For some reason this MV can not be entered.

The plane can take a lot of a.i. gunfire before the windows will crack and even then Rico would also need to empty a couple of magazines at it to make it catch fire.
Add a photo to this gallery 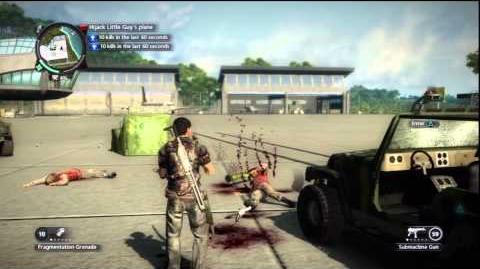 Retrieved from "https://justcause.fandom.com/wiki/Airport_Troubles?oldid=158705"
Community content is available under CC-BY-SA unless otherwise noted.