Animals are featured prominently in the Just Cause game series, either as part of wildlife or as props in Easter Eggs. They are also the subject of numerous idioms and figures of speech, some of which are used in the Just Cause series.

Other mentions and references

Pandak "Baby" Panay has a pet chameleon which sits on his shoulder and imitates his hand gestures during certain cutscenes. Panau also has a locally-produced ice cream named Chameleon Ice. There are no other reptiles to be found in Panau.

Although none appear in the game, the Ular Boys translates to "Snake Boys" from Malay and Indonesian.

Just Cause 3 is the first game in the series to introduce large living mammals as wildlife. These are also some of the first animals the player can directly interact with.

The following have been spotted in several game trailers and gameplay videos:

Other mentions and references:

One of the parrots near a Viper boatworks Seaserpent III.

The dog in Streets of Fire.

The "JürgenTech" logo on the side.

Bones of a cow attached to a dwelling in Panau.

Fish often strand themselves along the shoreline of Medici.

Some fish in Medici.

Cows seen in a field in Medici.

The easter egg dog at Soliana. 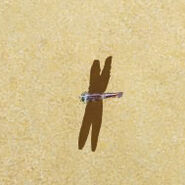 A dragonfly seen in Medici. 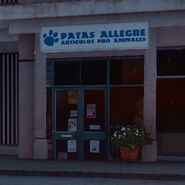 A petshop or veterinary clinic in Medici.

Close-up of a butterfly in the right upper corner. The vehicle is an Autostraad Reisender 7. 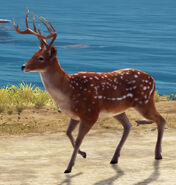 A deer seen in Petra, Medici.

Deer, or moose in Solís.

Flock of blue birds in Solís.

Tapirs at an ancient temple.

Tapirs at an ancient temple.

A Confetti Piñata. Note that this isn't the explosive type.

The town Aguaclara has a table with 5 Confetti Piñatas.

Three golden mountain goats easter egg, near the Illapa base.

A puppy that lives under El Abismo. This particular puppy is considered to be an easter egg.

A deer in water. Seconds after this screenshot was taken, a wave swept into the deer, killing it. 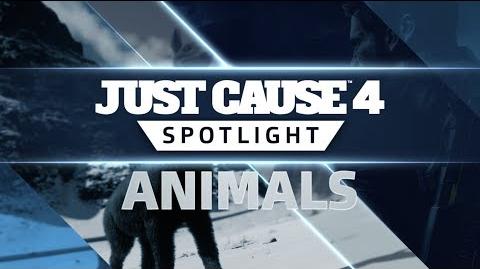