Annika Svennson (sometimes misspelled Svensson) is a character in Just Cause 3 and Just Cause: Mobile.

Annika's name is Swedish and Rico calls her "Ms. Sweden" during the Bavarium Sea Heist DLC. However, she speaks with an American accent.

According to Rico's observations in the mission The Great Escape, "inside she is a big softy". Her response confirms this, but she threatens to hurt Rico if he were to tell anyone.

Mario Frigo likes her "because she's so manly", but Annika doesn't feel the same about him.

The official Just Cause Twitter page published a small video about her on February 3rd, 2021. In addition to what this wiki already knew, it also revealed that:

The above-mentioned short video reveals a few things about her past career too: "Svennson turned her back on a privileged upbringing in Stockholm to circumnavigate the globe in a sailboat. She had made it as far as the Mediterranean when she was attacked by pirates. The gang, consisting of outlaws displaced from Medici, held Annika for ransom. While in captivity, she fell for the gangs leader Paulo de Silva. Her parents refused to pay the ransom, at which point Annika reportedly stole the money from them and joined the outlaws. After Paulo was murdered by Sebastiano Di Ravello, the Generalissimo of Medici, Annika became their de facto captain. Under her leadership, the outlaws continued to fight against Di Ravello's regime, stealing from his navy and disrupting his brutal purges. Mixed reports emerged from the events culminating in the liberation of Medici. Some suggest that Svennson and Rico Rodriguez joined forces to take down Di Ravello. Others claim that Annika remains a hired gun, albeit one with a personal affinity for Rodriguez."

During the events of JC3, Annika is a mercenary hired by Dimah. Upon learning that the Rebellion wants to "piss off Di Ravello" (her exact words), she asks for more pay, including double and 1.5 the original amount, but Dimah refuses.

She and Teo ask Rico to acquire the "invincible" Imperator Bavarium Tank (in the mission An Act of Piracy) for its presumably high price on the black market.

In the Bavarium Sea Heist DLC, Annika is the self-appointed leader of the heist crew consisting of herself, Tom Sheldon, Looch and Rico Rodriguez. As the leader, she demonstrates a no-nonsense personality, which agitates Sheldon.

At the conclusion of the mission The Heist Begins, Annika tells Looch and Rico not to wait up for Sheldon before splitting the "loot" acquired from Stingray. After it is revealed that Sheldon has double-crossed everyone and made off with the loot, Annika is obviously very angry, but she respects Sheldon's craftiness by stating "Well played Texas, you son of a b***h."

In Just Cause: Mobile

The cinematic trailer reveals that she will make a return in Just Cause: Mobile. Little is known, but she is said to provide intel and support to the player.

Wielding a Urga Vdova 89 in a promotional screenshot.

During An Act of Piracy.

Annika and Dimah in a trailer that features the mission Connect the Dots.

Annika, Tom and Rico in a trailer. 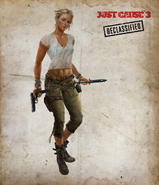 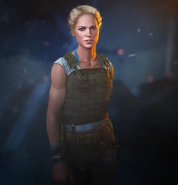 Artwork from an early 2021 video about her background.
Community content is available under CC-BY-SA unless otherwise noted.
Advertisement