As of the announcement of Just Cause 3, this article is locked as an archive. See the Just Cause 3 article and its talk page for updated info.

Just Cause 3 is a future game in the Just Cause game series.

Don't post anything into this article without a source.

This section is out of date as of november 11, 2014. See the Just Cause 3 article for current info.

"I can't see that Avalanche wouldn't want to continue on the Just Cause series," Thorsén said. "We love that franchise." Avalanche founder and original concept creator of Just Cause Christofer Sundberg explained to Eurogamer that while the Stockholm-based studio does not own the Just Cause intellectual property, it remains intrinsically linked to it. "I can't really comment on the future of Just Cause," he said, "but as we created the IP there is an attachment to the studio even though we don't own the IP."

In an interview with Develop, studio head Christofer Sundberg said: "I think there are a lot of connections with [Avalanche and] the IP and so we hope there's still a future in it, and that future to live as long as us... We are absolutely interested in working with the Just Cause IP again." None of this is a confirmation or anything just a desire, a golden wish that lives in the dreams of butterflies.

Square Enix has developed a new game engine, called Luminous (also referred to as "Luminous Studio"), that will not only make games look better, but also "reduce the cost of game development by up to thirty percent and will also allow development cycles to be shortened".

"this is the same cutting-edge game technology that will be found in PlayStation 4 and the next-generation Xbox.

"The Luminous Studio engine itself is being developed for game consoles, PC, smartphones and the web"

"Square Enix said that the company will also look to bring this development environment and engine (at some compatible level of fidelity and complexity) to more familiar platforms such as Xbox 360, PlayStation 3, assumably PlayStation Vita and the upcoming Wii U, and any major platform that supports programmable shaders; a modified engine might also be possible (similar to what Capcom did with with MT Framework Lite) on Nintendo 3DS, though that is not yet planned. Of course, don't expect these graphics and physics and particles on just any device that Luminous Studio engine can be tossed on, but the scalable nature allows Square Enix to shoot for the moon with its engine without completely leaving behind platforms we already know and love."

Just Cause 3 And Just Cause: Scorpion Rising Movie In Development

Remember those rumors about Just Cause 3 arriving in 2012 not too long ago? Well, in a passing note about the progress being made on the Just Cause movie, it was mentioned that the third game is in the works over at Avalanche Studios. Casually noted by the Hollywood Reporter in a news article detailing an exchange of writers for the upcoming movie based on the open-world game, Just Cause: Scorpion Rising, they briefly mention that the movie has received a new writer, Bryan Edward Hill, who is re-writing parts of the script originally put together Michael Ross. Of course, since the news was about the movie and not the game there were no additional details. However, as mentioned in the link provided at the top of the story, if we put 2 and 2 together: Avalanche Studios isn't releasing any games in 2012 but they are working on Just Cause 3. They have plans to release a next-gen game for Sony and Microsoft's new consoles before 2014 and a new movie based on the Just Cause game is on the way. So what does all this mean? It means Just Cause 3 could potentially have a movie tie-in upon release and come out with the next-gen consoles. But that's all just speculation folks.

Swedish developer Avalanche Studios has told Eurogamer Just Cause is "perfect" for the Xbox one and PlayStation 4. The third game in the open world action series is rumoured to be one of Avalanche's in development games set for release in 2013 or 2014. If Just Cause 3 is a next-gen game, based on when we expect the Xbox one and PS4 to launch (in time for Christmas 2013), it could be a launch title. "There is a very strong emotional attachment to the franchise as it was created by me and my design team here so we would obviously like to see a very bright future for Just Cause", Avalanche boss Christofer Sundberg told Eurogamer this afternoon. "In this day and age when everyone is struggling to make money, my opinion is that the JC IP is perfect for everything that next-gen has to offer."

Just Cause 3 and 4 domains registered by Square Enix

Square Enix may have tipped their cards a little bit today as it's been discovered that the company has just registered a string of domain URLs associated to the Just Cause series. One of which was for Just Cause 3 (an Italian URL) and the remainder of which were for Just Cause 4. The URLs ("JustCause4.com, JustCause4.fr, JustCause4.co.uk, JustCause4.de and JustCause4.it) were identified as being registered by Square Enix by the website Fusible after investigating the registrations. What does this mean? Not much right now. Companies routinely register domains just in case they end up needing them in the future. However, with E3 just two weeks away, it's possible Square Enix is getting its ducks in a row for an announcement regarding a couple new entries in the Just Cause series. Or we may only hear about Just Cause 3, with the Just Cause 4 registrations being protection against cyber-squatters. Either way, let's just hope this isn't an indication Square Enix will be announcing "Fabula Nova Crystalis: Just Cause."

Avalanche Studios holiday card seems to feature a couple of references to Just Cause. Could it be a hint that the long-rumored Just Cause 3 is indeed in the works and that the development is "nearly there"?

Avalanche Studios has released a video demonstration of their new Avalanche Engine 3.0. Despite the lack of official word, it's speculated and hoped that the video was recorded in a half finished new game - Just Cause 3. The demonstration is suppose to show what's possible in the new consoles, like "Xbox one".

It is speculated that it could be Just Cause 3. If that is the case, let's hope that they'll not forget the PC gamers.

Christofer Sundberg posted a gameplay screenshot on his Instagram account. It shows a guy Hijacking a motorcycle. The screenshot can be seen in the gallery at the bottom of the page.

This is speculated to be Just Cause 3.

A screenshot was tweeted by Avalanche Studios, it shows the probable protagonist Skydiving. Just like the first picture, this is in a desert. The screenshot can be seen in the gallery at the bottom of the page.

There's a large aircraft near him. It may be a ridged airship - a common and (then) very modern passenger aircraft in the 1930's. Ridged airships were used as bombers during the first world war, but the motorcycle from the first screenshot is too new for that era. But it could also be something similar to the Mile High Club, which is actually also an airship.

By observation of the blurred out background, it is possible to make out the landscape, with a large white shape that could possibly be an usually shaped building, or another airship closer to the ground.

This screenshot later turned out to be from Avalanche's new Mad Max game, announced at the E3 2013.

Speaking to Polygon, Christofer Sundberg said; "Just wait till June. We'll have more to say in June". There are currently rumours that a possible new Xbox will be announced at that time, which eventually could explain why June was their choice; or it could be due to the Electronic Entertainment Expo (E3) being in June. According to Avalanche, they currently have not one, but two bigger projects under development; one in the Stockholm studio and the other in the New York studio. They have also started a mobile division with "just three people".

As of E3 2013, Avalanche showed up its new game, called Mad Max, based and named after a movie franchise known under the same name. It is, just like the Just Cause franchise, a sandbox game. The screenshots that were leaked from Avalanche Studios in February are most likely from that game. No news about Just Cause 3 yet.

It is very likely that the game is under full development at this time. According to the previous news' issues, it's unlikely that the Just Cause franchise is at its end, and the number 9 issue above strongly supports the theory; "Avalanche Studios New York is developing an 'Unannounced Sandbox Action Game', which is to be published by Square Enix. The game is currently described as a New installment in a very well-known game series. The game is being developed at Avalanche Studios New York studio and is scheduled for completion in June 2015 for next generation console platforms."

A job post from 2012, made in the middle of the year, advertised a position at Avalanche Studios for someone interrested in working on a "ground-breaking" well-known Square Enix AAA-franchise. This is - most likely - the Just Cause franchise. The information leaked in the post was mostly ignored previously, but some places wrote it up. According to the post, the upcoming game will feature asynchronous multiplayer, web-based tools and mobile apps.

In spring 2013, Avalanche Studios made a trip to Costa Rica's rainforests to "research complex enviroments for future games." A lot of footage of the wild nature was taken, as well as a lot of sound recording. A slow-motion video of water splashing down on a beach was also made, aswell as about 100 photos of the sky, and a timelapse of a sunset. All of this was done to be able to recreate a natural environment in one of Avalanche Studios' next game, which might be Just Cause 3.

Square Enix has registered the domain justcause3game.com via its domain registrar CSC Corporate Domains. It's another piece of evidence that supports the theory that the game exists and could be announced very soon.

Just Cause 3 was not as expected revealed at E3 two weeks before this is written. There was just silence. However, when a fan told Avalanche Studios with a tweet that the by Ubisoft revealed Far Cry 4 felt like a complete Just Cause 2 rip-off in first-person, Christofer Sundberg replied that they were going to show some footage of one of their ongoing projects, once the "circus" was over. No exact time was pointed out, but keep your eyes open. It might happen sooner or later.

An ex-employee of Virtuos, which is a firm often hired to collaborate on development on major releases, has revealed that one of the titles he had been working on was Just Cause 3. The firm was hired by Square Enix this year to help working on the PS3 and PS Vita versions of the Final Fantasy X/X-2 HD remaster. An official announcement is still needed for the game to be confirmed, but most things point that it's going to happen sooner or later.

6 Xbox One screenshots were leaked (in the gallery below). As reported, the game is still at an early stage. It's speculated that the game will not be free to play and that it will be released in 2016, if not 2017. 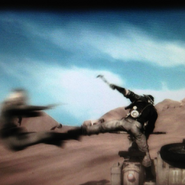 A screenshot posted by Christofer Sundberg on 2013.02.13. At first it was speculated to be of Just Cause 3, but it turned out to be of a new Mad Max game that Avalanche announced at E3 2013. 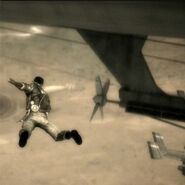 One of the leaked screenshots from november 2014.
Add a photo to this gallery