This article holds some of the rumors and news about Just Cause 4 from before the game was announced.

Rumors, unconfirmed news and unintentional leaks indicated that JC4 was in development years before the official announcement during the summer of 2018.

The following info was at first assembled in the Just Cause 4 article.

Square Enix registered some JC4 internet pages in 2012. As of June 2018, these pages were still blank.

For now the most official JC4 site is this page: https://justcause.square-enix-games.com/en-us

It's unlikely to be an actual hint of anything, but on January 4th, 2017, the official Just Cause facebook page posted the following: "Watching the trailer for Fast & Furious 8 and wondering if Rico needs a car with a grappling hook? seems to be the future." Trailer at youtube.

On October 17th, 2017 Christofer Sundberg tweeted, "We're taking our sandboxes online bringing all of you awesome players together. We're hiring for our fast growing MP-team. #AvalancheStudios". This means that the official multiplayer is coming to the sandbox game(s) in development right now. It seems that Square Enix has began to invest more in multiplayer games in general.

On October 23rd, 2017 he again tweeted, "I'm looking for a game designer, w/ experience from PvP and PvE for future games we have in the works for release in 2020.". That could mean that Just Cause 4 could come in 2020 and feature PvP (multiplayer) and PvE (player vs. environment / single player). Christofer Sundberg is known for teasing unannounced games.

In May 2018, a Walmart leak occurred, with many unannounced titles being listed on a pre-order tab. This included Just Cause 4, which could be announced at E3 2018. The leak mentions JC4 twice: once for Xbox One and once for Playstation 4.

Later in May, Avalanche Studios was purchased by a company called Nordisk Film that promised to leave them all creative liberties. It was also reported that apparently they're into ideas like "games as a service" and lots of DLC. More about that at the Avalanche Studios article.

In June 2018, Steam had accidentally revealed a Just Cause 4 advertisement, advertising pre-purchases for the game. If clicked on details, one would be redirected to the Steam store front page.

On June 10th, Square Enix officially released the trailer for Just Cause 4 as well as the release date being on December 4th, 2018 at the Xbox E3 conference.

The main reason why the wiki needed this article long before the game was actually rumored is the way forum threads use existing articles as sort of categories. There are multiple threads about Just Cause 4 and the future of the game series. Most notably: 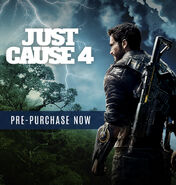 This image was among the leaks.

Walmart leak from May 2018.
Add a photo to this gallery
Retrieved from "https://justcause.fandom.com/wiki/Archive_of_Just_Cause_4_news?oldid=132298"
Community content is available under CC-BY-SA unless otherwise noted.