The Army of Chaos is a faction in Just Cause 4.

This faction is founded after Rico helps defend El Abismo from the Black Hand. The founding members are the population of El Abismo. They were already dissidents and considered outlaws by the government.

The term "army of chaos" is first used in a sentence by Sargento. Rico and Mira then agree to call the faction that. Really, its less of an army and more of a rebellion.

The Solino Civil War starts when this faction is formed.

Instead of individually liberating all military installations and towns in a region (as would have been the case in previous games in the series), completing missions (region strikes) in the Sargento line will unlock additional options to advance the army. The army can normally advance along the front when the player has caused enough chaos to have unlocked enough "squads" to command the army to advance. See here for more details.

After the final mission, Rico and Sheldon decide to take down The Agency. Mira tells them the Army has their backs.

The number 43 seems to have some significance to the organization as all their fighter and bomber jets are marked with this on their tail.

Members are normally gained by accepting volunteers from civilians. Santiago from the Solís Hoy radio even mentions that there's a number of people who are disgruntled and have things to complain about, who might feel that this is their best option. In some recruit training missions, there are several quotes suggested that a good portion of the Army also come from ex-Black Hand members who refuse to oppress the people of Solís any longer. Perhaps all vehicle operators have went through Black Hand training. This could explain (in-universe) how the Army is sufficient with vehicular combat despite most of its members being civilians.

While idle, some Army of Chaos fighters could comment that they had never fired a weapon before the civil war happened but they are willing to use their guts and tenacity to even out with the Black Hand.

As mentioned above, Army of Chaos rebels are almost always unable to stand up to the same number of Black Hand soldiers. In-universe, most of them have probably never went through any sort of combat training, and lack the skill and experience of the Black Hand. In-game, they are never equipped with any sort of tactical gear, and although some cutscenes show AoC models with improvised body armor (motorbike protection, construction helmet etc), they never spawn in the game. AoC footsoldiers use dated rebel weapons, which are almost always inferior to the Black Hand's modern firearms equipped with a Secondary Fire function. If one observes closely, one may notice that AoC rebels do throw grenades. However, they do so very rarely (in-universe this would mean they have very few of them), as opposed to the Black Hand who use them frequently and unsparingly.

In infantry combat, rebels and the Black Hand have different AI. Black Hand are programmed to use tactics and take cover, while the Army of Chaos just rushes the enemy, shooting at them often from the hip. In the rare occassions when the Army decides to not blindly rush at the enemy, they will take cover and blind fire. It should be noted that rebels have much poorer accuracy than even basic Black Hand soldiers, in terms of spread and recoil.

In close quarters situations, the Army of Chaos is seemingly able to handle the Black Hand much better (but they still don't stand much of a chance of winning) since they can freely spray their guns and still be able to hit their opponents. Ironically, rebels seem to have their accuracy increased when they are firing from cover, despite the fact that they almost always blind fire their weapons instead of taking proper aim like the Black Hand do.

As for RPG operators and snipers, Army of Chaos rebels are seemingly programmed identically to their Black Hand counterparts, albeit with a different enemy, lower health and the absence of a sidearm to switch to when enemies get in close.

Like the Black Hand, Army of Chaos rebels will prioritize the use of mounted weapons if they are close to one. When manning miniguns, mortars, railguns and AA guns, rebels are actually quite useful for a change.

Random battles in the countryside when the whole map is taken over are different. They initially spawn in about even numbers with the Black Hand, but usually, they eventually win by getting frequent reinforcements to replace their downed ones whereas the game does not spawn any more Black Hand. In these random battles it normally looks like the Black Hand should easily be able to win with the aid of an armored vehicle, but the vehicle (if any) is normally used somewhat conservatively and a swarm of rebels slowly chips away its health points bit by bit (usually by throwing hand grenades, although they do this very rarely), continuously respawning upon death. Eventually, the vehicle's health pool will be depleted and it will explode. If Rico interferes, however, the battle will be very different (see In heat section below).

In the absence of SAMs (such as at small outposts) they have little defense against helicopters or jets and are easily decimated. Usually, their only defense is a random Army of Chaos chopper showing up or an Army of Chaos vehicle.

Despite apparently being inferior to the Black Hand in terms of infantry combat, Army of Chaos vehicular warfare in terms of snipers and RPG operators is similar in the sense that they are programmed identically to the Black Hand (except they fight for different sides). In-universe, this is strange since a random civilian who picked up a gun and joined some rebellion shouldn't be able to drive a tank, or fly a fighter jet.

Overall, they are only helpful when in vehicles like helicopters, tanks and planes. They are particularly helpful in planes since they will at least keep Black Hand fighters, bombers and helicopters occupied, while it can be annoying to deal with planes for the player. Unless they have extreme numerical superiority, Army of Chaos infantry is only good as temporary distractions against the Black Hand. In most cases, all the rebels will get defeated in just a few seconds to minutes at most (unless the game spawns more in).

On the frontline, the Army does not get overwhelmed unless heat is triggered, resulting in advancing Black Hand reinforcements. This is because combatants near the frontline have some special AI that makes them blindly shoot at the enemy's general direction, whether there are enemies or not. See the article for more information.

On that note, Rico commonly says "They're holding their own." when he is at the front.

If Rico gains a high heat level, despite being in friendly territory the game will start spawning lots of Black Hand powerful enough to easily overwhelm all Army of Chaos soldiers in their way. Just Cause 4's spawning system is somewhat insensible, and will spawn and despawn things just meters away from the player. Additionally, rebels may spawn inside of Black Hand territory and vise versa, with the latter being the case when getting heat in already liberated territory. With a high enough heat level, Rico can lead a convoy of Black Hand into a friendly Army of Chaos base. The Black Hand will easily roll over all Army of Chaos soldiers as soon as they spawn in and effectively occupy the base, save for infinitely respawning rebels. However, once Rico gets far away enough the game renders the base' details out, and all Black Hand presence there will disappear.

At high enough heat levels, the Army of Chaos cannot effectively help Rico, and combat evasiveness and prowess will be required to the absolute maximum in order for Rico to survive. DLC does not help.

The Army of Chaos uses captured Black Hand vehicles, and repaint them in bright colors. See the Vehicles in Just Cause 4 article for all currently known vehicles and pictures.

Unless specified below, all of them below can be found patrolling controlled regions and at the frontline.

Eventually, they end up taking over and capturing all Black Hand bases, but the above listed vehicles are seen in use in missions and the front.

Unusually, the Army of Chaos use Black Hand weaponry at certain bases including Prospero Torretas, Campo Infierno, Base Aérea Yanacagua, and more. This can be explained by using captured weaponry, as history has shown throughout time.

Apparently the army uses "squads" as one of the unit types.

One of their vehicles.

An Army of Chaos soldier fires at Black Hand troops on the frontline.

Mira mentions the Army of Chaos in the Story trailer.

Army of Chaos vs the Black Hand in "Only villains do that" meme.

An Army of Chaos soldier ready to cause chaos. This soldier is holding a PGL-6 Grenade Launcher.

The presentation is hosted by Francesco Antolini. Note that his shirt has the original Just Cause logo. 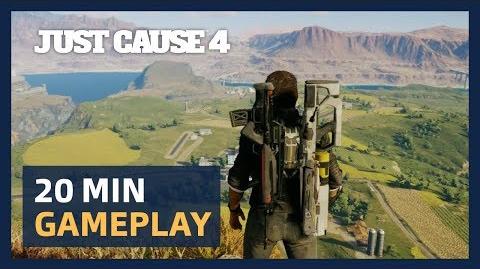