Back to page
View source

Banco De Medici a.k.a. "Banca de Medici" is a bank in Just Cause 3.

It's the state bank of Medici. They have several offices and ATMs at Citate Di Ravello.

The bank logo is an orange circle with three white stars on it. The stars are the Medici state symbol.

The bank is advertised on Mugello Farina Duo cars.

In some Towns in Medici there are billboards of "Medici Immobiliar" which is believed to be a real estate agency. The billboards have a picture of same man, who is also pictured on some bank windows. It's not known what connection the bank has with this.

It's unknown what the official currency of Medici is. In-game evidence suggests that multiple currencies are in common circulation. In the mission Turncoat, Mario says that Zeno was promised five American dollars. When Rico asks "Five… million?", Mario responds "That’s what I said! Millions!", indicating that Medici has a serious inflation problem.

An office at Citate Di Ravello.

The bank is advertised on a Mugello Farina Duo.

There are billboards of this guy at many Towns in Medici. His pictures are also on bank walls. 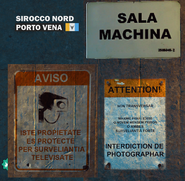 Medician language warning signs at Porto Vena. One of the signs warns of a fine of up to "E2000".
Community content is available under CC-BY-SA unless otherwise noted.
Follow on IG Newsletter Join Fan Lab