The Barclay Phantom is a sniper rifle in Just Cause (1).

The Phantom is a very long and large sniper rifle, resembling the Barrett M82A1.

It has a 200 round capacity, with 5 round mags. Very good power. It is the only rifle of any kind in Just Cause (1) that can kill anyone, using a single shot (also shooting through a window with an accurate shot is possible as well), blow up red barrels/gas stations, etc. It gives hilarious results when in a city such as Nuevo Estocolmo when killing someone in a car through the window then seeing it drive off the road and into the water around the city. Sometimes a pedestrian will be pushed into the water but will still stay alive. After a while the car will explode sending the pedestrian flying giving a more hilarious result. The power of the Phantom is roughly 1.5x-2x the amount of damage a single shot from a mounted gun would do.

There is a downside though. As its purpose it is for snipers and if in the middle of a firefight, even more of a downside. The 5 round clips and very slow rate of fire make the weapon only good for long range shooting. For people who are new to liberating, this is not one of the weapons which is advisable to have in the inventory because of a danger of being cornered. Unless equipped with a fast-firing weapon, this is NOT advised to use in liberations. It is also quite a disappointment that when shooting vehicles, it takes at least 2 magazines to destroy a Yamada 37-14 Vaquero. Because of this, the Lance FDL is better as an all around weapon than the Phantom.

Due to the fact that it is the most powerful hand-held weapon in the game (other than the rocket launchers), it will send a target flying for roughly a meter. Also when shooting someone with the scope, a bit of blood appears as red vapor but this has a lot more time on screen than any other weapon in Just Cause (1). It will appear more if a headshot is performed. This could be something similar to that of the Call of Duty "Gib" system where body part(s) are blown off. A lot more blood appears in Just Cause 2 though. "Gibbing" is more of a First-Person-Shooter feature than a Third-Person-Shooter like the Just Cause game series.

On display at the San Esperito Arms Fair.

A Barclay Phantom dropped from a Montano sniper.

There are two army snipers on the roof of the highest house. It's a coastal town with a nearby safehouse at Provincia de Castillo. 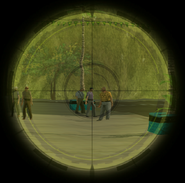 Add a photo to this gallery
Retrieved from "https://justcause.fandom.com/wiki/Barclay_Phantom?oldid=132426"
Community content is available under CC-BY-SA unless otherwise noted.