The Berawan Besar Mountains are a snowy mountain range in Just Cause 2.

"Berawan Besar" is Malay and Indonesian for "Large Clouds".

This territory is unlocked in the first Reapers stronghold takeover mission.

After the completion of the stronghold takeover, the area will belong to the Reapers. It's the highest mountain range in Panau, the highest mountain being the Snow Peak. Views from the peaks include many of the nation's landmarks such as the Mile High Club, Panau Falls Casino, and Gunung Hotel Ski Resort. The mountains' wilderness is a very easy area to get lost or stranded in. Due to the larger amount of military bases within this area, it is not hard to come across a military base or facility. The military probably prefers having more bases and facilities due to the isolated area of the Berawan Besar Mountains and likewise, civilians are less frequent because of a higher military presence.

The mountain range provides a massive contrast to the lower elevation tropical forests which surround it. The area is flooded with military bases and consists of very few civilian settlements. While the tropical area is hot, humid, and crowded, the mountain range is frigid, barren and a complete wilderness, with only a few small settlements and a higher frequency of military bases. The mountains also serve to contrast the entire tropical setting - standing out as a frigid wasteland in the middle of a tropical paradise. It also has a forest, a river, and a tropical area going through the center of it. There is a Reapers stronghold on the western half of the mountains. There's a Ski Resort and a frozen lake in the north of the eastern half.

Although the area has cold and snowy weather, there are no glaciers found in the mountain range. There are, however, signs of glacial erosion, even if there are no remaining glaciers.

Steam can always be seen in the exhaled breath of the characters.

A rather unique thing about this district is that all of the military bases here (except two) either start with the words "Bukit", "Kampung", or "Kem". And the other two military bases, Kastelo Singa and Lembah Genting Tinggi, both have Bio Fuel Shafts.

It is constantly snowing on top of the mountains, regardless of cloud coverage. The climate of the Berawan Besar mountains is very unrealistic and varied, as there are some patches of snow reaching down to just a measly 100 feet above sea level. Storms never happen in the mountain range because of this.

It's in the center of Tanah Raya, the largest island of Panau.

Berawan's highest peak. The casino is on the far right, the Mile High Club to the far left.

Bandar Kayu Manis, one of the many ancient towns found in the district.

Pekan Batang Kelepek, one of many villages in the mountains.

A beautiful sunrise over the mountains.

A mountain road, during the mission "Ups and Downs". 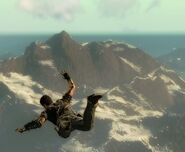 Bukit Bura, one of the many military bases in the district.

Falling from the Snow Peak, while in the Stunt position.

The laptop at Kem Gunung Raya in Clear Skies.
Add a photo to this gallery

Retrieved from "https://justcause.fandom.com/wiki/Berawan_Besar_Mountains?oldid=160930"
Community content is available under CC-BY-SA unless otherwise noted.