watch 02:39
The Loop (Games)
Do you like this video?
Quality Level:

The aircraft features an unusual wing design for a jet, an unswept wing similar in appearance to the propellor Lockheed C-130 Hercules in shape and position. Its cockpit, however, appears to be from the Ilyushin series aircraft such as the Ilyushin Il-18 and Il-62, but in terms of the engine type, it has similarities to older variants of the Ilyushin Il-76, along with a comparable fuselage size, but with landing gear from the aforementioned Hercules. Its vertical stabilizer is strangely small to an odd design usually seen on fighter aircraft. Strangely, the aircraft has its engines extremely far apart, especially for a jet aircraft. The inboard engines are much closer to the fuselage than what would be found on any real-world aircraft.

The Bering is the largest vehicle in the game and is a "tactical airlifter". Disappointingly, the plane's rear cargo hold cannot be opened. The only way to use this vehicle to transport anything besides Rico is to use his grappler to tether something to it.

It can normally spawn in jungle or desert camouflage, but there is a glitch that when the plane explodes it's wings turn to snow camouflage.

Oddly, the Bering's ailerons work backward. When turning, the aileron of the inside wing will turn downwards, when in reality it would have to turn upwards to make the plane bank in that direction.

Of all the planes in the game, it's the heaviest and slowest to react to controls. It is one of the slowest as well, despite it having four jet engines. If the player is going slowly enough, it's nearly impossible to crash this aircraft during a landing because of its massive landing gear. The stopping distance is so short that you are able to take off again without turning around.

It can take the weight of many vehicles, though its cargo bay can't be accessed. Therefore, tethering a vehicle to the plane and taking off will be no problem. Such vehicles include smaller planes, trucks and boats. It is the only plane that can lift the SV-1007 Stonewall. The Aeroliner 474 can lift it, but quickly nose-dives into the ground after the initial take-off.

Many airstrips are not suitable for this aircraft, as the wingspan is too wide for many smaller airstrips. The plane can't safely land in smaller airports. There are still airstrips with suitable runways, however, such as Pulau Dayang Terlena.

As with the Aeroliner, it's nearly impossible to fly the Bering upside down without any input from the environment.

The maximum speed of this aircraft is about 212.73 MPH. Click to see how it was tested.

After Just Cause 2's first patch, which fixed spawning issues with some vehicles, the Bering I-86DP became the rarest vehicle in the game. Once you've completed both airbases at which the Bering takes off, there's no way to fly it again, unless you start a new game, perform a glitch listed below, or do the mission Bridging New Contacts.

Obtaining one after base completion[edit | edit source]

There is only one way to acquire the Bering after completing the bases without using glitches. Right after you complete either airbase, the Bering will spawn, giving you one last chance to fly it before it never spawns again.

To obtain the Bering after completing both of the airbases at which it spawns using the infamous "bering race glitch cheat" method, use the following instructions and/or the video below. Note that the video starts where step 3 leaves off.

If you fail to hijack the Bering or the G9 Eclipse, it isn't necessary to repeat steps 1-3. Simply go to the menu and select the option to restart the challenge. Then, continue from step 4.

The remains of a crashed Bering I-86DP near the western beach on Hantu Island.

An orange one in the Just Cause 2 Multiplayer mod.

The Lockheed C-130H, the plane it is based off. (despite having turbofan engines and a different vertical stabiliser)

Size comparison between one and a Aeroliner 474.

The crashed Ular Boys one in Stranded.

A I-86DP Crashed into a tree. Notice how it has not exploded yet.

Top view of the wings.

The two camouflage variants of I-86DP. The jungle camouflage aircraft is AI controlled.

A Rowlinson K22, the smallest aircraft in the game, on the wing of the Bering, the largest in the game.

An Si-47 Leopard stuck underneath a Bering at Kem Jalan Merpati. This is during a glitch where the Bering won't move.
Add a photo to this gallery 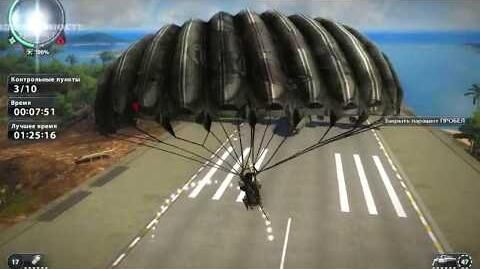 Retrieved from "https://justcause.fandom.com/wiki/Bering_I-86DP?oldid=161575"
Community content is available under CC-BY-SA unless otherwise noted.