They are most likely oil refineries, or chemical systems for the creation of bio-fuel. They're shaped like towers and are mostly inside concrete shafts. They are most likely used for producing Ethanol, which can be used as direct fuel in vehicles, or mixed with gasoline. It can also be used for cleaning and such. Mixing with gasoline is usually done at Emas Hitam Oil Refinery.

Strangely, most of them have shipping containers at the bottom. The ramps and walkways prevent them from being lowered, or lifted, so those must have been placed there during the shaft construction. Every shaft has destructible wooden boxes and a table with at least one chair.

Many of the shaft components are inside the ground, as evidenced by the bottom of the shaft extending through the floor and by there being at least one inaccessible door on the shaft wall.

There are only 15 shafts in total that can be blown up for money and chaos points, but finding them is no problem. They are all stationed at military bases and will be in plain sight, due to the fact that they're probably the biggest things present on base.

This is a complete list. All locations below have one shaft each.

They are usually heavily guarded, with at least one SAM site present at the base they're in. Rarely, some bases do not have SAMs.

Like pipelines, they are immune to all weaponry and must be hacked to be taken down. Unlike the pipelines however, one must fight their way down to the bottom of the shaft and hack the control panel from there. This is easier said than done if you underestimate the forces guarding these shafts. There's always a Demolition Officer and at least 4 elite soldiers present at the bottom of the shaft. The soldiers that walk around on the gantry ways shoot at you unless you are a certain height away from them which in some cases helps. Alternatively you could just grapple soldiers on these walkways which saves the need for ammunition being wasted as the soldiers always move around.

Fuel shafts will not explode until you have exited the shaft.

It's not necessary to fight all the guards protecting the shaft. A faster way down would be to grapple down using the various platforms inside, kill the demolition officer and his elites and proceed to hack the shaft. Once done, grapple back up, ignoring all hostiles. Any and all guards that followed you into the shaft, or were already in the shaft obstructing the stairs will be killed in the following explosion, thus removing the need to expend ammunition on them. You could also sky dive into it, but this is highly unadvised as there are many objects obstructing your way down. It would be advisable to get weapons with a decent level first before even thinking about going down in there. Most of the combat is close-quarters so a shotgun etc would be well suited for this but it is up to the player to decide. Surrounding the shaft is a sunken down area. To be on the safe side, get out of this area during destruction.

A Demolition Officer in the bottom of a shaft. 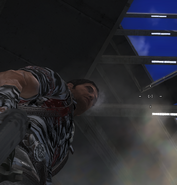 At the bottom of a shaft.
Add a photo to this gallery

Retrieved from "https://justcause.fandom.com/wiki/Bio_Fuel_Shaft?oldid=157859"
Community content is available under CC-BY-SA unless otherwise noted.