Black Gold is a Reapers mission in Just Cause 2.

Use any aircraft from the same airport. There are a couple of planes such as the Si-47 Leopard and G9 Eclipse that are available to use, alongside an AH-33 Topachula helicopter at the airport. Use whichever you like. Just keep in mind that every off-shore rig in Panau has a SAM and that the easiest way is always with a helicopter. Ideally, try and take out the SAM before anything else for an aerial approach. 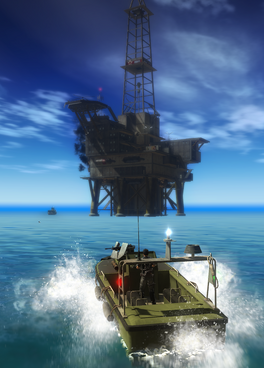 If you were shot down by the SAM, you can complete the mission by the many other available weapons:

Retrieved from "https://justcause.fandom.com/wiki/Black_Gold?oldid=157568"
Community content is available under CC-BY-SA unless otherwise noted.