The Black Hand is a mercenary faction appearing in Just Cause, Just Cause 3 and Just Cause 4.

This article is about the Black Hand in Just Cause. It's the same organization as in Just Cause 3 and Just Cause 4, but there's just too much information for a single article. Not to mention spoilers.

The Black Hand are President Salvador Mendoza's foreign mercenaries (officially the "foreign security specialists"). They wear black uniforms and all their vehicles are either black, or a combination of black and dark gray. See also: Faction colors.

The Black Hand are seen for the first time in the mission River of Blood, where two of their Pequod - Harpoon PC 350 patrol boats are guarding the Quayside loading area.

"The Black Hand? What the hell are they doing here?" - Tom Sheldon during the mission River of Blood. The first mention of the Black Hand in game.

After the mission Guadalicano Choo Choo the Black Hand will replace the San Esperito Military in village liberations. They have better equipment than the police and send in more and better helicopters. While the police usually equip themselves with small arms like the Harker 357 Sawback revolvers and rarely use Grenades, the Black Hand are almost the opposite. Vehicles with Mounted Guns are also seen a lot more during the liberations. At higher heat levels, the Black Hand will get involved in pursuing Rico.

If you have any trouble finding any of these weapons or vehicles, see Rare vehicles, Talk:Rare vehicles and the weapons' respective articles.

Black Hand soldiers, on Isla Dominio. The vehicle in the background is a Rotor Industries ATRV.

The Black Hand soldiers that wield the Fleisher AR-5 Blizzard have camouflage hats instead of masks.

In this cutscene from Dismissed Without Honors, they can be seen using Haswell Gen2 Vindicators. This is the only time this particular kind of soldier uses them.

A Black Hand soldier wielding an Adler FF M-72. This NPC model is unique in that their masks do not have the orange visors that the Vindicator troopers have. The vehicle behind him is a Stinger GP.

A Black Hand soldier wielding the Lance FDL in combat.

The same Black Hand soldier wielding the Lance FDL. The vehicle in the background is a Harland DTWV-2 Rocket Battery.

Incredibly rarely, instead of one of the other Soldier NPCs, this pilot NPC can be seen flying a Black Hand helicopter.

Another MV that is exclusive to Streets of Fire only.

Fukuda Buckskin Trapper. This vehicle is exclusive to the missions Streets of Fire and Dismissed Without Honors.

Meister ATV 4. This vehicle is exclusive to the mission Streets of Fire.

Harland DTWV-2 AA gun.
Add a photo to this gallery

Huerta PA51 Aztek.
Add a photo to this gallery

Ulysses-McCoy Redcloud.
Add a photo to this gallery

A Jaeger 5FJ 7.
Add a photo to this gallery 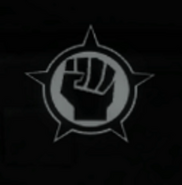 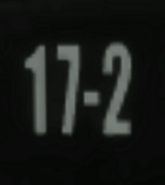 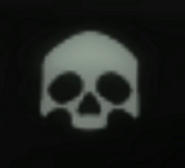 The Black Hand's stripe decal.
Add a photo to this gallery
Retrieved from "https://justcause.fandom.com/wiki/Black_Hand_in_JC1?oldid=160355"
Community content is available under CC-BY-SA unless otherwise noted.