watch 04:21
Wiki Targeted (Games)
Do you like this video?
Play Sound
Quality Level:

Bolo Santosi is a character in the Just Cause game series.

She was born on August 18, 1979 in Lembah Cerah, in the Lautan Lama Desert region of Panau. She stems from a long family of revolutionaries, hence her obsession with the communist history of China, leading to her leftist political orientation.

She is the feared leader of the gang called the Reapers. She is a socialist revolutionary. Not only that, but she is known to be very greedy, as one of the reasons she wishes to rule Panau is because of the island's rich oil reserves. The Reapers originate from the Maoist followers in Panau.

Bolo Santosi has a very distinct hate for the Roaches, as Rico is asked to set them up or kidnap one of their operatives on numerous occasions. That's easily explained in that the Roaches are a capitalistic oriented organization, while the Reapers are a communist organization.

It is said that she is highly corrupt and will stab anyone in the back for no reason. She uses her supposed beauty and charm to persuade people to do her bidding.

There are three easter eggs for her in Just Cause 3.

By the time of Just Cause 3 she has left Panau and presumably quit the Reapers membership to become a DJ. The circumstances of this career change are unknown.

Her DJ career continues at Solís, where she performs on a stage at the Mile High Club (though this time it's just a building on a mountain).

She can also be seen at a stage at the finish line for the race mission Run: Caminevado, if the player doesn't blow her up by crashing into the stage, which is very likely to happen since the stage is right behind the line.

In the beginning cutscene to every Reaper Faction Mission (except for stronghold takeovers and "I Want to Break Free", where she arrives seated on a boat), Bolo Santosi will be driven to the mission start location by her Reaper associates, hanging onto the back of a dark blue Niseco Coastal D22 with Reaper faction symbols as posters along the sides. The vehicle's color may or may not be unique, but the symbols on the sides certainly are.

She knowingly manipulates just about everyone around her into doing her bidding and seduces most of her male associates. She makes frequent sexual references in all discussions.

In the Reapers faction mission, Driving Miss Stacey, she calls Stacy a "slut" and a "whore". It is not completely certain if she does that to discredit her, because Bolo cannot stand any competition for the attention of men, or if that is true, because Stacy dresses like the exotic dancers at the Mile High Club.

She seems to have affection for some members of the Reapers, while others are pawns in her game. The mission Slippin' and Sliding is about saving her "favorite" man.

In the mission Chemical Heist, she sends Rico to steal an experimental mind-control chemical from the Gunung Tasik research facility. She hints that she intends to use the chemical as a "date rape drug" for the government officials whom she plans on kidnapping and interrogating.

As for Rico, she shows affection while at the same time showing disdain and hatred when/if he fails to complete a mission. Close to the beginning of the game, she doesn't trust Rico and tests his loyalty through missions - "Please me and you may find me to be pleasing as well". In the end of one of the Reapers missions, she is very pleased with Rico's actions - "I hope that one day you will take care of my young ones as well."

It is not known if Rico likes her or not, but at the end of the mission Can I get a Witness when Bolo notifies Rico that she's sending reinforcements to help him, he mutters "I like what you say and I like the way you say it, lady."

The Sloth Demon thinks she looks beautiful. This is revealed when he warns Rico about her after the mission Rocket Science.

Her voice acting may be intentional for comic relief, as it is generally over-exaggerated and borderline offensive at times, much to the player's enjoyment. Bolo Santosi's voice actor is a London-based British theater actress, Liz Sutherland, who is in her 30s.

She has stated that western audiences are not familiar with South-East Asian accents and the producers wanted something different and new to the western ear, also adding in that she had not meant for the accent to be Singaporean but an exaggerated version of it, which was meant to be exotic, unfamiliar and unreal. She had also considered her role to speak in a "unique" accent a pleasure.

She pronounces "comrade" as "com-raid" instead of "com-rad", a British pronunciation.

On the back of her Niseco Coastal D22, as she's giving Rico the briefing for the mission Can I get a Witness, in JC2. 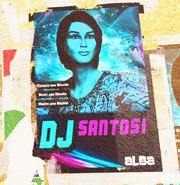 DJ Santosi at work at a party in the Lacos countryside, in JC3.

DJ Santosi at work at the Mile High Club (JC4).

DJ Santosi at work at San Marco at the end of the mission Run: Caminevado, in JC4.
Add a photo to this gallery 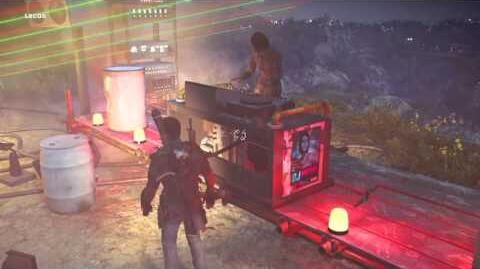 Retrieved from "https://justcause.fandom.com/wiki/Bolo_Santosi?oldid=172851"
Community content is available under CC-BY-SA unless otherwise noted.