Boom Island is a mysterious island in Just Cause 3.

It's a medium sized island located in the south-west of Medici. Its name most likely refers to the large amount of Red Barrels at the ruins around the island. The island also has a system of gravel roads over it. The roads are all relatively smooth and designed for higher speeds, some of the roads are even at a sideways angle like a roller coaster. There are several large gaps in the roads that require the player to jump over a cliff.

There's a lot of goats grazing on the island.

The island is notable because of 3 sets of star fort ruins surrounding the bay containing explosive barrels and being possible to Fast Travel to from the start of the game.

On the console versions of the game, starting up Just Cause 3 while game installation is still in progress will allow the player to play on Boom Island. This may also explain the large distance between Boom Island and the rest of the Medici landmass.

Boom Island could also be a test island, as there are terrain errors, such as floating plants etc. However minor map errors are not too uncommon.

The landscape of Boom Island. 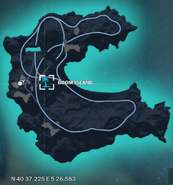 As seen on the map.

There's a strange circle on the game map a little to the north-east of here.

The strange circle in relation to the island.

Looking towards the south-western shore from a Black Hand Corvette while a CS Navajo is lining up a strike.
Add a photo to this gallery
Retrieved from "https://justcause.fandom.com/wiki/Boom_Island?oldid=163817"
Community content is available under CC-BY-SA unless otherwise noted.