The Capstone Hydra is a rocket launcher in Just Cause 3.

It's a rocket launcher that has 5 small rocket launching tubes in it. The launcher's design is mainly, if not completely, based on the real world M202 FLASH (FLame Assault SHoulder Weapon), which was made popular by Arnold Schwarzenegger in the 1985 movie "Commando".

The Rebel drop description says "Capstone's Hydra RPG is aptly named, because it's as terrifying as an actual hydra. It fires five, count 'em, five rockets per shot!"

According to text on the weapon, the rockets are 66 mm thick. This further supports the notion that it is based on the M202 FLASH because that weapon fires 66 mm incendiary rockets in reality.

This weapon fires five rockets at once, but it only consumes one piece of ammunition. This makes it seem like a cluster grenade launcher.

It fires 5 rockets that at first fly in close formation, but in proximity to the target split up and approach the target from multiple directions. At longer ranges only one or two rockets actually hit what you were aiming for. However, that can be useful for destroying really big targets like a Satellite Dish, or destroying a cluster of several targets. 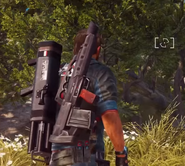 It's the left weapon.

Rico does not seem to be concerned with rocket exhaust. One of the loading pictures. The text and picture combination is always random. 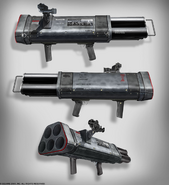 Concept art.
Add a photo to this gallery

Retrieved from "https://justcause.fandom.com/wiki/Capstone_Hydra?oldid=139694"
Community content is available under CC-BY-SA unless otherwise noted.