Casino Bust is the second Agency mission in Just Cause 2.

Maria Kane takes Rico to Karl Blaine's Residence, but Karl is not there. A TV is on and shortly afterward, President Pandak "Baby" Panay announces "People of Panau. It is I, your beloved President. Today I have issued the order to close down and clear out the den of foreign decadence called Panau Falls Casino. All foreign nationals in this casino will be rounded up and tried before deportation. Let it be known that those who harbor foreign criminals and unpatriotic scum will be brought before the court and tried as traitors." Upon arriving here, Rico will remark "I've seen some dumps in my time, but this place..." Rico will also say "Sheesh", but the text isn't shown on screen. Maria will remark "It's worse than we expected."

Jade Tan appears behind Maria, pointing her revolver at her, resulting in Rico pointing his gun at her. Shortly after introducing themselves, Jade tells them that Karl is at Panau Falls Casino, which means he is probably in danger now. Jade takes Rico there on her Hamaya Cougar 600 motorcycle and Maria goes back on the helicopter.

Jade drops Rico off near the casino and tells him to hurry and explains that if the government catches Karl, she's probably going to be the next one to be hunted for. She leaves in a rush, calling Rico a "Spook".

There are soldiers in front of the building that, while are not needed to be killed, are recommended to eliminate since they will constantly be shooting at you. There's also a Demolition Officer that will throw triggered explosives at you, so keep a distance from him. One method to kill the Demolition Officer is by shooting or grapple him to one of the cars available and ride it until he bleeds out and dies. Make sure that you are in a safe distance from him because immediately after you kill him because a number of his grenades deploy from his belt and blow up. Afterwards, Maria informs you that soldiers have planted breaching charges to get to Karl Blaine and that you must grapple your way up. If you are new to the game and don't know how to climb up the building check the intel section of your PDA. Once you reach the top, there will be soldiers guarding the bombs. On each tower, there will be three guards around each bomb. There are also two weapon boxes on each tower, both containing one assault rifle each. The bombs are located near the edge by the door, and there will be an indicator so they can't be missed. Once all troops have been eliminated and all bombs disarmed, Maria informs you that the Panau Military has sent helicopters to kill Karl Blaine. They must be taken down in order to save Blaine. One way to do this is to hijack the first helicopter and then use the helicopter's miniguns to shoot down the second one. Alternatively, you could just shoot down the first helicopter with the assault rifle and the second helicopter won't show up. If you don't know how to hijack the helicopters, check the intel section in your PDA.

Once Rico is in, there will be another cutscene where Rico tells Karl that he's here to help him, in exchange for information on Tom Sheldon. At one point, a grenade is tossed at them, which Rico tosses back. They keep talking until two grenades are tossed at them. Rico swiftly grabs Karl Blaine and jumps out of the window.

They land near Karl's Saas PP12 Hogg. At this point the player has control of Rico again. You'll be instructed to double grapple the car to a nearby tractor, to pull it onto the road. This is not timed, so you could collect the nearby resource item near the temple on Karl's side of the road if you want.

Get on the roof of Karl's car after pulling his car out and stay in the Stunt position. Karl will drive back to his house and you'll have to protect the car from any government goons.

Tips for the pursuit:

Once arriving back at Karl Blaine's Residence, there will be another cutscene. Karl offers to download information onto Rico's PDA to help him on his mission and also provides beacons to access the black market dealer. He also downloads the information about the factions of the islands.

After completing the mission, the PDA will automatically open, giving you map markers for the first faction missions. The next Agency mission is The White Tiger, but more Chaos points must be earned to unlock it. The faction missions are a great way to advance the game at this point as they will reward additional chaos points and various black market items.

Rico is now free to roam Panau and cause chaos however he sees fit. If the player decides to explore, it is advised to keep on the lookout for resource parts, as they can serve in a variety of roles, including weapon and vehicle upgrades, health improvements, and other perks that will drastically help further down the game.

Grapple to the top.

Beta footage.
Add a photo to this gallery 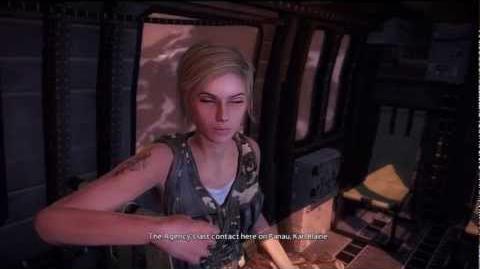 Retrieved from "https://justcause.fandom.com/wiki/Casino_Bust?oldid=165183"
Community content is available under CC-BY-SA unless otherwise noted.