Chaos points progress the game by unlocking missions, weapons and vehicles from the Black Market. These new items in turn allow you to cause chaos more effectively and the cycle repeats. Causing chaos can often get government attention, making heat.

Chaos points are not the only things to collect in Panau. One should also collect the Collectable Items, which also progress the game and can be used to improve Black Market weapons and vehicles.

When all Agency missions are complete, the game unlocks Mercenary Mode, which allows the player to complete the rest of the game and obtain all remaining chaos points.

How to get more points (JC2)

Pretty much anything you can do in Just Cause 2 increases the chaos points.

Destroying the objects in this group will almost always cause them to catch fire after destruction. There are nine different objects in total:

Usually found at military bases, some of these catch fire after destruction. There are six different objects in total:

There are three of them in total:

These help the regime to have a great influence among the civilians. There are two of these in total.

There are four of these in total:

Chaos points return in Just Cause 3 and are again awarded for destroying government property, but they have no influence on game progress. However, you can be awarded with achievements/trophies for reaching a certain amount of points.

Sometimes the player may earn chaos points from sabotage objects they were not responsible for destroying, such as an enemy jet randomly being destroyed out of sight (probably crashed into a steep mountain). This is often caused by trains crashing in the distance and it does not cause the player to gain heat.

There are a couple of Easter eggs that feature scorpions in the JC2 game art style.

Chaos is again the base of progress in Just Cause 4. Now there's constantly a chaos progress bar at the right upper corner of the screen. This bar represents the amount of chaos needed to progress with the Army of Chaos. "2X" points are given during heat. It's not really double, but more like 175%.

Chaos points are one of the two requirements to liberate most regions (the other being the completion of region strikes). When the bar is full, you receive squads. Squads are used to liberate regions, but only after you complete the region strike. When the region strike of an oppressed region adjacent to a liberated region is completed, there will be an option to advance the frontline and liberate the region, as long as you have enough squad reserves. Advancing the front "costs" squad reserves. Different regions require different amounts of squads to liberate, ranging from 1 to 4. There doesn't seem to be a limit to the amount of squad reserves a player can have, but after liberating all the regions in Solís, chaos no longer amounts to any squads as squads are useless at this stage (no more regions to liberate).

Points are awarded for:

Destruction, chaos and explosions have always been the focus of the game series, and Just Cause 4 is no different. However, destroying specific targets that usually result in a satisfying explosion has also been an important part of previous games, and necessary for game progression; not so much in Just Cause 4. Now that the amount of chaos and destruction required to progress the game is very little compared to previous games, there is really no need to destroy chaos objects. Outside of missions, the player does not really need to target chaos objects in particular because combatting the Black Hand in heat can easily rack up enough points to get enough squads to take over territories. Additionally, destroying chaos objects which are only found in bases does not award more points than destroying vehicles which are found pretty much anywhere, and continuously show up during heat - yet another reason to target vehicles instead of chaos objects. 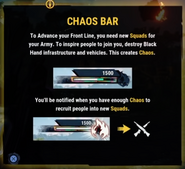