Civilians are a type of character in the Just Cause game series.

Civilians refer to people who are not members of any armed factions. Every game has civilians as a neutral faction who are only there to make the game world look more realistic. Civilians can be seen walking around, farming, using vehicles, fishing and performing many other activities. Civilians are never armed as San Esperito and Panau both have a strict gun control laws. However, there is one exception in San Esperito.

In both games, if you get into the Stunt position of a civilian-driven car, the car will start speeding, but in Panau, the civilian will also begin to threaten you and demand you to get off. Oddly, if you just jump on the car, the car will drive as normal, unless you're in front of the driver, which causes him to stop.

Civilians in San Esperito are of Latino-Hispanic ethnicity.

Salvador Mendoza's dictatorship regime makes a minimal difference to any of the peoples lives, because unlike in Panau, there are no Roadblocks here. The military can rarely be seen killing civilians in politically unstable Provinces. A military vehicle can randomly stop and the soldiers can start shooting at everybody.

The military is quite benevolent to civilians, and often times, when the AI causes vehicles to crash, the military driver and the civilian driver gets out, do that reprimanding gesture, and then go off. The military even has an annual San Esperito International Arms Fair. Unfortunately, Rico disrupted the 2005 one.

It has been reported that a glitch can cause civilians to retaliate harassment by punching Rico.

All civilian settlements have lots of posters of Mendoza, until they're taken over by the Guerrillas. Then the posters are replaced by green and red Guerrilla posters featuring the Guerrilla leader, Jose Caramicas.

In game the civilians are harmless. Civilians can be seen driving all around San Esperito and usually do not possess a sports car or a vehicle that is expensive, showing the standard of living that the majority of the island has to live with on a daily basis.

Sometimes in a city, a car can stop and a pedestrian can get into the passenger seat. The car then continues to drive.

There's actually a very large number of pedestrian speech lines in JC1, so this list is only for examples:

The civilians, or possibly a small faction at the Hidden temple at Isla Maria Dolorosa have their unique lines of dialogue.

There is great diversity in the wealth and jobs of civilians on the islands of San Esperito. The standard of living for in the coutryside is fairly equal, but there's a very notable divide of wealth and class between countryside and city people. Most civilians wear normal clothing and live in villages, while some civilians who are seen in cities and sometimes even at the El Volcan, wear suits and executive clothing, which obviously means that they are within the higher class of the civilian population and have an important job and/or a highly paid career.

Some of the employment on the island is aviation and cargo transportation, evident through civilians being thrown out of aircraft such as an Alexander AX-14 when Rico hijacks them. Several towns and villages have their own airfields.

Most civilians are farmers and fishers, but there are also lots of jobs in the industry (factories; oil rigs; pump jacks; gas stations; industrial parts of Esperito City). The cartel villas employ lots of guards and probably also farmers (unless the guards do the farming).

According to general Jose Durango, unemployment is high among young people.

The civilians can be seen operating all the different non-armed vehicles. The nation even has relatively developed civil aviation, with many villages and small towns having their own airfields. Most vehicles that are driven by civilians tend to be either slow or of a mediocre performance. Although sometimes this is not the case with some people. Cars that are high in both performance and rarity values can be seen driven around the cities and towns.

Note that this gallery has mostly 5% of the people.

A cowboy in Esperito City.

A villain in Esperito City.

A smoker in Esperito City.

A pilot at the airport.

Worker at the airport.

Police officer seemingly getting punched by a civilian.

A rare man, appears during a Guerrilla sidemission. 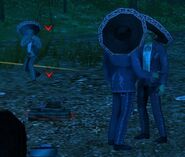 A civilian woman is driving Rico around Nuevo Estocolmo in a Rossi 866 Corral. See Hijacking for how to do this.

A guy with a construction helmet. They are on the top of every San Esperito tower.

The civilians are of Malayo-Polynesian descent and speak Singlish. Civilians can, when everything works as it should be commonly found all over the Panau. Minors (anyone under 18) are absent from the game. Many of them wear cone hats just like many rice farmers do. When people talk, their mouths never move. They likely don't have talking animations (or any animations that have their mouth move.)

All the civilians do is walk, yell, run and crouch (when scared), farm, sell goods, and drive. There are no passengers in cars anymore, unlike in Just Cause 1.

Most vehicles found on the Panauan roads belong to civilians. The vehicles can easily be stolen by Rico by getting up in Stunt position and press the action button. If just standing on the roof of a land vehicle, the civilians will drive faster then they usually do. Other cars on the road will also crash with things or turn to the sides in this situation. Civilians will complain loudly about you in the stunt position. If you shoot civilian cars, the person inside will stop the car and then run away. Also when shooting civilian cars, you will most likely get Heat after a few shots, even if the Panau Military is absent from the location.

Planes controlled by civilians can be found sometimes in the air above Panau. Hijacking these planes in mid-air will not give you Heat unlike the ones controlled by the military. The civil aviation in Panau is nearly non-existent in comparison to San Esperito, as Panau has very few airports and they're all controlled by the Panau Military.

The AI operating the vehicles is not the best, as sometimes a civilian driving a boat might crash onto land.

Most civilians are most likely poor and outside the few cities in Panau, most of them works as farmers, fishermen, and traders at marketplaces. There are also some of the shops in the cities and the more wealthy villages.

In the cities, there are probably many civilians working in various corporate, government, or other administrative positions and in private companies. Some are also working at the Panau Broadcasting Company. Most of these jobs are found in Panau City and for the last category, Bandar Baru Nipah.

Most of the Panauans in the Selatan Archipelago and the Senjakala Islands probably work as maids and workers at the many tourist resorts in Panau. Some Panauans might work at other attractions, such as the Panau Falls Casino, Gunung Hotel Ski Resort, Mile High Club, and the Three Kings Hotel.

Civilian workers can be found around most factories and also at military facilities. They are most frequently found at ports and airports. They are most likely paid minimum wage or have lower income salaries. They are also found at the power stations in the country. However, the one particular exception would be the Awan Cendawan Power Plant. The only explanation to this is that the facility is eventually controlled by engineers of the Panaun Military, and most likely a lot of them. It could be very well possible that the military engineers have the necessary training to handle a nuclear reactor because ordinary civilian engineers might not have adequate training and knowledge. The civilian workers also work at Offshore Rigs in the country's waters, though not at the two heavily guarded oil refineries in the country.

The standard of living for civilians is a lot more divided in Panau, with the majority of the civilian population being financially poor and cars such as the Mancini Cavallo 1001 being very rare among common vehicles like the Tuk-Tuk Rickshaw.

Panauans can most frequently be heard yelling or mumbling incomprehensively, but they do have a few speech lines in the absence of action. Sometimes they even have short discussions about how the military represses them, but these always end as they spot Rico and/or just walk off. Oddly enough, tourists don't have their own lines, and therefore say the same thing as oppressed citizens of Panau.

When Rico is in the Stunt Position of a car:

When Rico bumps into a civilian:

In Medici the civilians can be seen doing a lot more things than in Panau. There are also many more different civilians. Civilians can sometimes be seen complementing Rico, or making comments about his grappler and/or parachute. They also talk about how they dislike Di Ravello.

When Rico is in the Stunt position of a car:

When Rico bumps into a civilian:

When you grapple, use the parachute or wingsuit:

When Rico grapples a civilian: 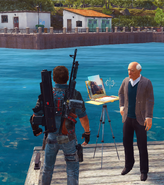 An artist at Celata.

Civilians digging through garbage at a destroyed town north of the wall.

Somewhere at Grande Pastura at a destroyed town north of the wall.

Somewhere at Val de Mar at a destroyed town north of the wall. 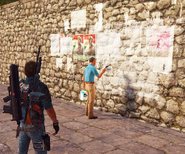 A guy removing graffiti and posters at a Liberated town.

Solís has by far the worst drivers. Getting run over by random cars is possible in the previous games, but the other civilians at least usually make some effort to avoid the crash. In Solís they often just run over who ever happens to get in the way.

Solís is possibly the worst known country in the Just Cause Universe. No other nation has homeless people. They can be seen sleeping on benches and digging through garbage at multiple towns and cities. Solís is also the only country so far to be known to have murders among its civilian population. As mention at the Lago Mitu description, murder weapons are commonly disposed of at that lake.

However, according to a caller on the Solís Hoy radio station, Solís is the best country and she is proud to have to work 70 hours per week at a factory to be able to afford basic things like food and rent. A pedestrian gentleman can at times be heard explaining that he has to work 60 hours per week for another decade to pay off his debts.

There are also some... somewhat strange, not to say outright suspicious NPC jobs seen at some locations. For example, Puerto Málaga has a number of shipping containers. It's possible that a civilian worker may spawn at one of these and he may be using a small welding torch in an attempt to cut open the container door. The only obvious reason to use a tool like that at a container door is to cut it open to steal the content, because the rightful owner should obviously have the key to any lock.

Many small towns and villages have civilians barbecuing, or as Tom Sheldon would explain it "just grilling". 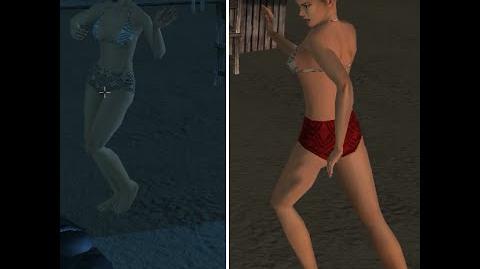 Black Hand attacking civilians during the mission Streets of Fire: 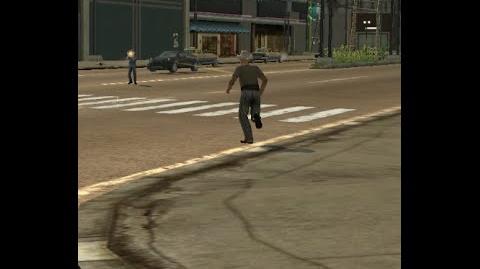 Some rare event in Just Cause 2: 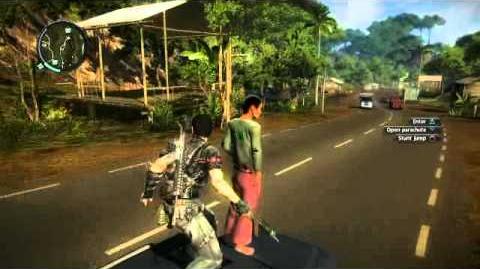