The Cluster Bomb Launcher is a DLC weapon in Just Cause 2 and Just Cause 4.

As a natural progression of the Grenade Launcher, the Cluster Bomb Launcher is a weapon of small-scale mass destruction for personal use. It is equipped with something that looks very similar to the EOTech Holo Sight and an M4-like extendable stock. Strangely, the weapon has a magazine but fires a single projectile, followed by a reload. It looks like a box magazine variant of the Mako Hammerhead from Just Cause (1). The weapon is completely fictional, and its model does not seem to take inspiration from any weapon in real life (save for the holo sight).

The JC4 version looks exactly the same (save for the drastically different graphics of the two games).

It shoots a grenade (same range as the Grenade Launcher), which explodes into 6 additional grenades when it lands. They all have the same blast radius as the first. It's very powerful and capable of destroying a GV-104 Razorback in one shot. It has 20 units of ammunition when bought from the Black Market and despite having a magazine it has to be reloaded after every shot. It's more powerful than the Grenade Launcher and cheaper in the black market. Like all DLC weapons, it's already upgraded to 6 stars.

The weapon now has at least twice the range. The projectile explodes either when it hits something, or after having flown to its maximum distance. When exploding, it releases 5 smaller bombs that can fall for up to about 5 meters before they each explode. It performs similarly to an airburst grenade launcher, and is an effective counter defilade weapon.

The original explosion of the projectile does very little damage (its only purpose is to launch the small bombs). However, each small bomb deals about as much damage as a grenade, so this weapon is lethal against groups of infantry. While not very efficient, it is still possible to destroy armored vehicles with several clusters.

The main projectile flies along a parabolic trajectory (it lobs), so it can be fired over obstacles, like a mortar. It's very effective against enemies/targets behind walls, as the player can shoot at the top of the wall and the smaller bombs will drop onto the target(s) below and behind it. Because of the way it fires, it can be considered artillery, since lightweight handheld mortars are included as well.

It seems to be a very convenient way to destroy things from a distance.

Unfortunately, it only comes with 10 shots, but JC4 has multiple supply drop pilots, so that shouldn't be too problematic.

The Black Market Boom Pack Downloadable content for Just Cause 2 must be purchased for £1.59, €1.99, or $1.99 from the PlayStation Network, Steam, or Xbox Live. Prices may differ over time.

This weapon was added to the game on 2019.08.15 as a part of the free "Legacy Pack" downloadable content for Just Cause 4. 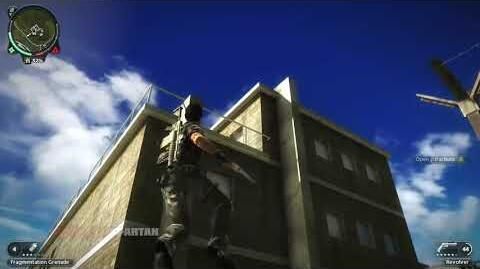