This article is about collectable items in Just Cause 3.

There are a total of 5 different sets of collectables in Medici. Each type provides an award once they're all collected. A sixth type is added by the Bavarium Sea Heist DLC.

"Di Ravello tapes" are Sebastiano Di Ravello's personal audio diary tapes hidden all around Medici. There are 12 in Insula Dracon, 20 in Insula Fonte and 39 in Insula Striate. Collecting all of these will reward you with a Golden Urga Mstitel.

Once picked up Di Ravello monologues about his military career, starting from enlistment as a private.

A vintage part is something that's buried in a pile of dirt with a shovel sticking out of it. Rico doesn't use the shovel, he just pulls something too small to be seen out of the ground with his hand.

Each region has its own set of vintage parts. Upon collecting all of them for a region, it will reward you with that region's corresponding vintage item. Once all of the vintage parts have been collected, Noir Mode, a black-and-white camera filter, will be unlocked.

There are many "Daredevil Jumps" in Medici. Completing them will reward you with the Incendiario Monster Truck, the custom Geschwind V3000, and the Custom Kletterer 300 in Insula Striate, Insula Fonte, and Insula Dracon respectively.

It's a lantern with multiple candles inside. When interacted with, Rico lights them and says that he will see to it that the person did not die in vain.

These are small hills surrounded by a small stone wall. On one side is a wooden door. Rico puts his left hand on the door does the cross sign with his right. After Rico pays his respects, a flagpole with a flag of the Rebellion appears and a Urga Stupka-210 spawns behind each tomb.

These are added in the Bavarium Sea Heist DLC.

Eden Callaghan tapes are Eden Callaghans audio diary. The tapes can all be found in the Stingray Area. Once the area is liberated, the markers for the tapes get revealed on the map. It's also possible to detect them before area liberation by being near them, but some tapes are on the Stingray central rig.

The tapes reveal the story of the the eDEN Corporation and how the experiments started out. This is all told by Eden Callaghan herself. 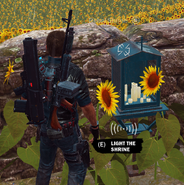 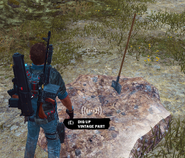 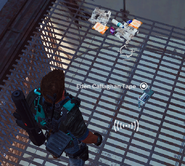 Eden Callaghan tape.
Add a photo to this gallery

Start a Discussion Discussions about Collectable Items in Medici