Corda Dracon: Centcom is a regional central command base in Just Cause 3.

The base is built on the ruins of an old star fortress. It is the military Central Command (CentCom) base for Insula Dracon, and as such, can be assumed to be the headquarters of the military in this region.

It has a large central tower, which looks like an air traffic control tower, or a flak tower. Other parts of the base include an underground reactor facility, helicopter landing pads and lots of communications equipment.

Due to being a CentCom base, Corda Dracon is defended by FOW EMP canons, which can be disabled by completing the mission Electromagnetic Pulse. These cannons can later be replicated by unlocking/equipping the handheld FOW The Thunderbird.

The map description states: "Translatable literally as "Heart of the Dragon", Corda Dracon's central location and elevated vantage have long made it the key to controlling the region. The base's construction was the forerunner for the General's grand experiment of marrying classical and contemporary military installations, a theme later reproduced across Medici."

Before you complete the mission Tangled Up In Blue there are closed doors protecting the interior of the base.

The base is located on the coast of the Corda Dracon province. The base is mostly inside a mountain, although some buildings are visible on top of the mountain. There's an entrance for boats at sea level.

This base takes up the entirety of the Corda Dracon province.

Many Medici Military vehicles can be found at the base, including:

The FOW protecting this base are EMP cannons that disable any vehicles within the base.

Simply don't use vehicles and instead use your grappler and weapons resourcefully to complete the base.

Xbox One   A glitch can occur that causes the EMP cannons not to appear when first visiting the base. This can be fixed by the player dying.

View of the base from a CS7 Thunderhawk.

Disable cooling turbine. In the mission Tangled Up In Blue.

Swimming long tunnel. In the mission Tangled Up In Blue.

Reactor room. In the mission Tangled Up In Blue.

Bavarium reactor. In the mission Tangled Up In Blue.

Base explosion. In the mission Tangled Up In Blue.

One of the FOW guns.

The Urga Vulkan pillbox guarding the entrance to the base after the base is liberated by the Rebellion. Rebel women are very enthusiastic, but not very strong. Either that, or she's very tired. As a minor glitch, the tripod has not spawned.

Some military vehicles here including three Urga Szturm 63As, a Weimaraner W3, and a Urga Bkolos 2100. Notice that the prompt for opening the gate controls is still there, even though it's irrelevant now. 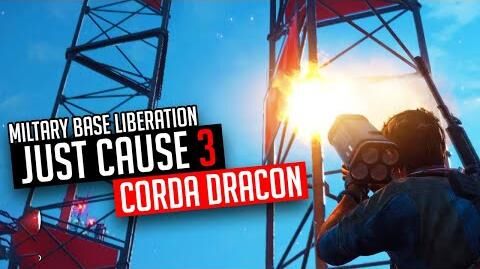