The DA 9.3 Lightning Gun (aka DA 9.3 "Lightning Gun", the name that the game seemingly prefers to use) is a weapon in Just Cause 4.

As the name implies, it is an experimental/prototype weapon that "shoots" lightning (electricity, really) instead of ordinary ammunition. Its primary fire emits a continuous stream of electricity while triggering secondary fire launches a grenade that summons a thunderstorm, making lightning strike targets in the immediate vicinity.

The weapon bears a futuristic, sci-fi theme. Its overall shape somewhat resembles a shotgun, but the barrel of the Lightning Gun is thicker than that of most single-barreled shotguns. It's actually a bullpup, because the lightning battery (what it uses as ammunition) fits behind the main grip, as revealed in the reload animation. It has electrical cables, battery-like devices and other odd electronic parts on it. It is mostly white and grey with a few yellow and red parts. Sometimes, it may appear somewhat brownish, but this is just the lighting and the heavy yellow filter of the game (the closeup was taken with the yellow filter lessened). What appears to be a grey barrel shroud is mounted on the forend of the weapon, beneath the barrel. A green, night-vision-colored sight (resembles a reflex RDS, except its completely green) is equipped as well. It is entirely cosmetic and does not function in the game.

The weapon is unique and it is safe to say that it does not draw inspiration from any real life weapons.

This weapon's primary fire shoots a continuous stream of "lightning" while its secondary fire launches a "storm grenade", which summons lightning to strike targets in the area. Primary fire is effective against infantry and most chaos objects, but not so much against heavy armor, especially armored vehicles. The lightning from the secondary fire has high damage output, but is imprecise and may not always work in the player's favor.

Ammunition for this weapon can only come from supply drop, or rarely from weapon crates because no NPCs- Black Hand soldiers or Army of Chaos rebels- wield this gun.

Holding down the primary fire button will charge up the weapon for a brief period of time (less than half a second). After the short charge up, the weapon emits a completely straight beam of blue-white electricity. Spread and recoil is virtually nonexistent, making this one of the most accurate weapons in the game. That being said, the electric arc obstructs view of small targets (such as infantry) far away, making it difficult to aim at longer ranges. The weapon has short to medium effective range, as the electricity beam just disappears completely if it travels for more than ~100 meters without coming to contact with anything. Each mag can hold up to 1000 units of ammunition, which allows for prelonged fire before needing to reload. Strangely enough, the weapon can hold a maximum of two mags, with the second being much smaller and holding up to 300 units. Although the HUD sometimes displays the ammunition units remaining, its normal ammunition readout is a bar, representing the amount of ammo left in the mag.

The weapon's primary fire is fairly versatile, being effective against infantry, most chaos objects, small destructibles. and unarmored vehicles. It is capable of downing a Black Hand private in under a third of a second. Soldiers equipped with body armor are noticeably more resilient, but just over half a second of continous electrocution should kill them (save for Titans and Colonels/Super Elites, who can stand up to several seconds of continuous fire). Strangely, the electric current is unable to go through the shield of a Riot Shielder or Defender Machine Gun. See the Trivia section below.

As one could expect from an electroshock weapon like a Taser, there are no bonus damage points for zapping enemy person in different parts of the body; hence, there is no need to aim for the head.

The Lightning Gun is noticeably more effective at destroying chaos objects than most small-arms. However, it is no substitute for an RPG or grenade launcher.

That being said, the weapon suffers in terms of anti-vehicle abilities. Even completely unarmored civilian vehicles can stand up to a few seconds of continuous fire; as one may expect, it is practically useless against tanks and armored warships. Armored vehicles can be taken care of with the Lightning Gun's secondary fire, the storm grenade.

Note: This section has a lot to do with a Lightning storm. See that article for additional related information.

Triggering secondary fire whilst using the weapon will launch a storm grenade. Upon impact, the grenade will explode in a small flash of sparks that will trigger explosives or cause disorient infantry but only take little damage. Within seconds, a lightning/thunderstorm shows up. Lightning will strike targets in the immediate vicinity of the storm grenade.

However powerful this weapon may be, this weapon still has its fair share of downsides. Lightning does not discriminate between friend or foe, meaning enemies (Black Hand facilities/assets (eg chaos objects), vehicles, soldiers), allies (Army of Chaos rebels and their vehicles), neutrals (civilians, civilians'/unoccupied cars), and even Rico can all be struck and often killed/destroyed by lightning. As a result, it is advised not to use storm grenades when carrying out missions that require certain objects and/or people to remain intact (undestroyed) and/or alive, despite the fact that said entities often possess an incredible amount of plot armor.

Besides the lightning sometimes not hitting the player's intended target, the storm grenade does not always work outside of the rain forest or grassland biomes. Also note that the secondary fire strikes targets without warning. Lightning from a usual lightning storm with rain and clouds causes sparks to crackle on its target before striking, giving the player time to stay clear of the area. Lightning summoned from the Lightning Gun's storm grenade does not give any kind of warning as to where and when it will strike, giving the player no time to dodge.

The Lightning Gun's primary fire in use. Note the ammunition bar HUD showing that the gun has just over half of a magazine of ammunition and three remaining storm grenades.

A powerful blue lightning strike, but this is part of a Zona Dos storm. 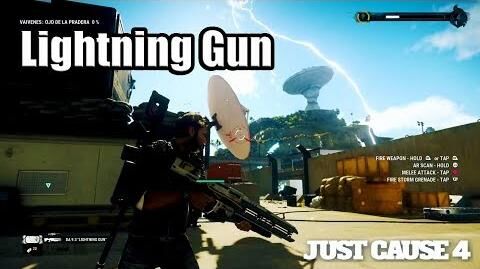 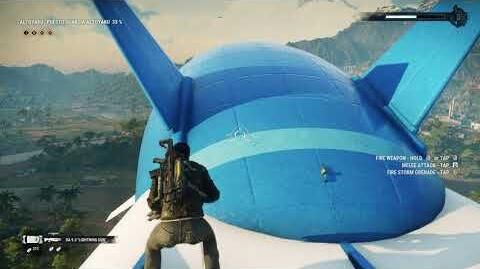