Danger Rising is the third and final downloadable expansion pack for Just Cause 4.

Longer description was released as the expansion pass description on the official Square Enix store: "Armed with a new prototype hover board, Rico vows to take down the Agency after learning of their plans to eliminate him. Tom Sheldon joins Rico on his mission and the pair begin by investigating a large submarine which has surfaced ominously off the coast of Solis. Could Rico be out of his depth against The Agency? The odds are mounting and the hunter is about to become the hunted."

After the release of the trailer, the description was set to: "In Danger Rising, Rico vows to take down the Agency after learning of their plans to eliminate him. Tom Sheldon joins Rico on his mission to stop the Agency with the all new game-changing Hoverboard and gravity-defying The Stormalong EM Zero – a gravity gun that significantly upgrades Rico's arsenal!"

According to Victoria Setian, senior producer at Avalanche Studios, this is the largest one of the expansions.

Because Rico and Tom stopped Project Illapa (or are at least in the process of doing so), The Agency is now angry at them. Similarly, as stated in the mission Operation Illapa, Rico is also angry at the Agency, although previous grievances have gone as far back as Just Cause 2.

The Agency sends Agent Emerson Miller with a fleet of large submarines to Solis in order to kill Rico Rodriguez and Tom Sheldon. These submarines and their vicinity act as bases that must be destroyed.

The agents are using grapplers, but theirs only have the JC2 level of functionality. The agents can also fire guns while standing on special drones.

It starts with the mission Old Friends and New Enemies, when Tom gets a tip to check something out. He invites Rico along and they get ambushed by The Agency. It turns out that Rico has secretly been tracked by the Agency via a homing device built into his grappler ever since Medici. The Agency considers Rico to have stolen the grappler, because Rico kept it on when he quit. He has no intention of returning the grappler and absolutely hates being tracked, so to deactivate the homing device he needs to find agent Miller.

The Agency show up with 7 giant submarines that function as Agency bases. Completing these counts as missions. It is slowly revealed after each mission that the Agency has a secret, ulterior motive for its presence in Solis and that the elimination of Rico and Sheldon is of high priority, but not the highest.

After destroying all other submarines, Tom locates Miller and his flagship, the USS Statesman. This results in a boss battle and a big reveal in the end. To avoid spoilers, go read the mission article, if you're interested: Rogue Agent.

There are 3 types of Agency operatives. All of them are equipped with grappling hooks, marking the first time in the series with enemies that can grapple around if Just Cause 2 Multiplayer and Just Cause 3 Multiplayer are not included.

All of them have a grappler that looks the same as the Just Cause 3 grappler, but with only Just Cause 2 grappler functionality. They grapple themselves onto walls and ceilings a lot and can also grapple onto drones at will. 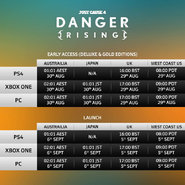 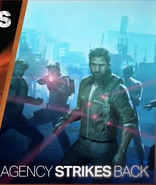 Screenshot from the first teaser. There's a fleet of giant submarines.

The submarine is surrounded by floating destructible objects.

An Agency cruiser, the front end of USS Conquest and a few A5 Coyote Assault Choppers.

An agent is using a new white gun. This turned out to be the Niagara 9mm Bullpup.

Rico is flying on the hoverboard. The weapon on his back is the new Stormalong EM Zero.

An agent wielding a Sequoia 370 Mag-Slug.

The USS Whitefeather at night.
Add a photo to this gallery