Dare Devils of Destruction is the first downloadable content for Just Cause 4.

"Dare Devils, takes racing and destruction to new heights as Rico battles the gangs of the Solís underground in heart stopping death races and rampage rallies"

The DLC adds a new island west of the mainland, directly west of Ojo de la Pradera. Isla Santuario holds a system of racetracks and a number of industrial-looking buildings.

The DLC adds about 15 different races that involve surviving automated weapons, eliminating competing vehicles through the use of vehicle mounted weapons and causing destruction on special stunt arenas. The DLC provides a number of weaponized vehicles (see list below).

The following is a quote from here:

Today marks the unveiling of the adrenaline fuelled Dare Devils of Destruction DLC for Just Cause 4, releasing April 30th 2019 for Xbox One, PlayStation 4 and Windows PC.

Dare Devils of Destruction is included in the Just Cause 4 Expansion Pass, and Gold Edition purchasers will receive 7 days early access on April 23rd.

Rico Rodriguez gears up for a high-octane adventure in Dare Devils of Destruction as he burns rubber and shreds metal in this celebration of violent vehicular mayhem.

You can watch the trailer here: (See at the bottom of the page.)

What's in the Dare Devils of Destruction DLC?

Put the pedal to the metal, earn the respect of rival gangs and take on three deadly challenge modes across 15 explosive new missions.

Completing new missions unlocks over 16 all-new weaponized vehicles that you can drop in to Solís at a moment’s notice. Experience new levels of destruction, attack missions in never-before-seen ways, employ new tactics against the forces of the Black Hand and cause pure mayhem in the world of Solís.

Solís has 3 illegal gangs - the LNP, Gearheads and Los Artistas - that used their black market to provide (smuggle) all sorts of forbidden goods to the people and to help people disappear. This was a lucrative business for them during the Espinosa regime, so they're not happy about Rico and his Army of Chaos. They decide to invite Rico to Isla Santuario to participate in their extreme motoring challenges to see if he can earn their respect. Rico agrees and makes a deal with them: If he can win the races, the gangs will support his cause and if he should lose, then he will leave Solís.

See Category:Dare Devils of Destruction for everything the DLC adds and Some Trouble for the beginning of their missions.

A video dedicated to the vehicles (see below) says that there's 16 vehicles.

Other vehicles that have been more or less associated with this DLC:

The vehicles video (see below) describes them as "tooled-up rides, you can burn rubber in".

The music from this DLC has been released separately. Link to location.

What the community snooped out prior to announcement

One of our editors has found shortly after the DLC announcement, but well before the first trailer came out that there are multiple loading screens speaking of the DLC. These were likely added to the game by some patch. Here is what they say:

This revealed that there are three gangs ("LNP", "Los Artists" and ?), at least two different types of race/challenge events (races with "Bonus Rings" and "Gearhead Rampages") and at least two new items of equipment ("energy shields" and "Excorpión").

The "Excorpión" turned out to be Ricos car and the unknown third gang was later revealed to be the "Gear Heads".

From a 2018 pre-game launch DLC announcement.

The first promotional screenshot of the DLC features a DLC-specific version of the Mugello Quipozza G jumping from a new type of presumably immovable ramp-trailer. 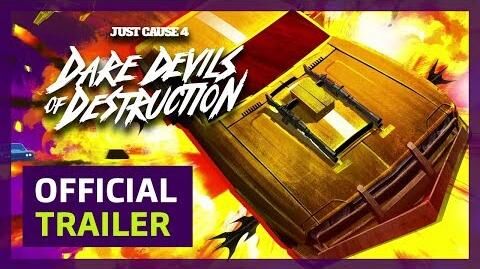 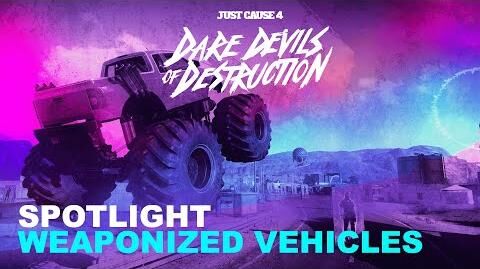 About the game modes and some plot introduction: 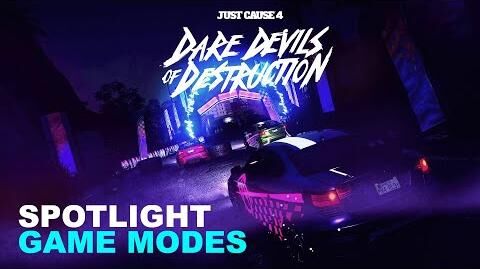