watch 03:19
Wiki Targeted (Games)
Do you like this video?
Play Sound

This article is about all the downloadable and otherwise extra content for Just Cause 3.

Downloadable content (DLC) is any extra content for the game, that is not a part of the normal base game. Some DLC is provided for free as an award for people who pre-ordered the game and some are sold separately. See also: the "special editions" section at the Just Cause 3 article.

Christofer Sundberg, generally about JC3, early 2015: "Beyond launch, we are likely to look into DLC packs and items as part of our ambition to support Just Cause 3 and its players for many years to come, but until that time we're completely focused on making the best Just Cause game we possibly can."

Preorder items (which is now available for everyone as separate DLC)

This was the award for pre-ordering the game.

In game these vehicles can be obtained through the Rebel drop, which is unlocked in the mission Mario's Rebel Drops.

By now the vehicles can be bought separately.

This was a part of the "EB games exclusive day one edition".

In addition to the above Weaponized Vehicle Pack, it includes the Capstone Bloodhound rocket launcher.

The Final Argument sniper rifle was provided for anyone who pre-ordered the XL edition from Steam.

This is provided with the game for anyone who bought the "XL" edition of the game. Anyone else can purchase it separately.

It adds a new island group to the map: Insula Lacrima. Lacrima has lots of abandoned old eDEN Corporation research bases, which have been taken over by the Black Hand, who have their own plans for it. There's also a new friendly faction, Former Prisoners of Lacrima (unofficial name) and new weaponized vehicles, the Mechs, which are equipped with gravity-manipulation devices. The DLC has 2 relatively long missions, but the number of gameplay hours is much greater, thanks to the new areas to explore and liberate, 2 new challenges and new technologies to use.

The end of the Mech Land Assault DLC hints that the Black Hand have something at sea. What they have was left unknown.

The Sea Heist features enormous off-shore rigs and new eDEN Corporation technology that can control lightning. All these things are located at Scolio, an area of the sea off the western coast. The area has a cluster of smaller rigs, several of which are half sunken and a large main rig, called Stingray.

This DLC provides 2 new missions, 5 new completable areas to take over, and 1 new challenge. It also provides the weaponized Loochador rocket boat and the Eden Spark, a device that can summon natural lightning at the target.

This is a Just Cause 3-themed DLC for the game Farming Simulator 15.

The following announcement info is a quote from the official JC site and the Farming Simulator site, where it was posted on April 1, 2016:

"Fresh from his latest assignment to rid his beloved homeland Medici of a vile dictatorship, our hero Rico Rodriguez is taking a break from destruction to try his hand at tending the soil of Farming Simulator 15 in a FREE DLC UPDATE.
Coming this summer, Just Cause 3’s iconic STRIA RUSTICO tractor will debut in Farming Simulator 15. Repurposed by Rico to aid the rebels in their revolution, Just Cause 3 showed that there was nothing that the Rustico couldn’t do, now it’s time to see what its trademark havoc causing can bring to the world of harvesting.
The Rustico being the latest in a long line of fantasy inspired agricultural rides that Rico could borrow in the Just Cause series. Known as the “Medician workhorse” the Stria Rustico could be seen throughout Medici working the fields and was pride of place at many farmsteads in the glistening Mediterranean paradise.
Long praised by Medici’s Ministerio de l'Agricultura for its reliability and unprecedented haulage, the Rustico will be adorned in its sun weathered coat of paint from Just Cause 3, but that is not all... As the Rustico comes to you straight from Medici, this version will be equipped with nitrous boosters as per Rico’s specification adding an extra layer of danger and excitement to your ploughing– it’s pretty difficult to pull off contour farming whilst being propelled uncontrollably at speeds of 80mph or more.
Using the Rustico will also change your farmer’s appearance to that of Medici’s favourite son Rico Rodriguez, hero of the Just Cause games complete with his famous grappling hook and wingsuit (hopefully your tractor doesn’t get airborne, but then with Rico anything is possible).
The Just Cause 3 DLC for Farming Simulator 15 including the Rustico and Rico farmer skin will be available on PC, PS4 and Xbox One this summer."

By 2021 the above links linking to the announcements both redirect back to the game's home pages (Just Cause and Farming Simulator respectively).

The Kousavá rifle is a fan-designed weapon, shaped like the U-39 Plechovka, but with added Scorpion hands and tail.

It differs from the other Mechs by being blue, having less visible armor and by being armed with a missile launcher.

The game Hitman Sniper has a DLC that adds a mission that takes place in Medici. According to the trailer, the DLC adds the Final Argument gun, retractable tethers that cause items to explode once they've been pulled together, explosives, Medici Military marked Weimaraner cars (the vehicles are probably just scenery objects) and possibly more.

There's a lot of lights floating in the air above the sea just north-west of Insula Striate. They're only visible at night. Later these turned out to be parts of Insula Lacrima (Mech Land Assault DLC). 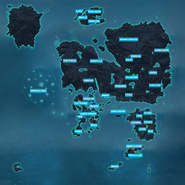 Some areas are added by DLC. For other maps see Maps.
Add a photo to this gallery
Retrieved from "https://justcause.fandom.com/wiki/Downloadable_content_for_Just_Cause_3?oldid=172109"
Community content is available under CC-BY-SA unless otherwise noted.