This article lists the downloadable and other extra content for Just Cause 4.

Downloadable content (DLC) is any extra content for the game, that is not a part of the normal base game. Some DLC is provided for free as an award for people who pre-ordered the game and some are sold separately. See also the "game editions and DLC" section at the Just Cause 4 article.

There are several known editions available for pre-order. The vendor-exclusive packs and items were announced separately on only vendor sites and there are still several months remaining, so it is very likely that there may be more DLC items available later. We can not guarantee that the below list includes every vendor-specific DLC bundle/pack that exists, because obviously there are thousands of stores on the internet.

These 3 were the first versions to be revealed at an official Just Cause 4 advertisement site. Some vendors have added additional exclusive items to their versions, but the basic info for "Digital deluxe edition" and "Gold edition" are so far always the same.

Most of the pre-order items have later been released as separate DLCs, so search for their names at stores.

Some stores are selling special versions of the game that include additional downloadable, or extra items.

Gold Edition from Amazon, or BestBuy (PS4 and Xbox only and does not ship internationally at this time link 1, link 2):

Any edition from BestBuy (PS4 and Xbox only):

Any edition bought from BestBuy will include the "Renegade Pack" that contains:

Gold Edition from Steam (PC only):

Day one edition from GameStop or EB Games (console only):

Golden Shotgun and Renegade Rifle, both having counterparts in the game that function the same, are purchasable for $4.99 and $2.99 respectively (as of early 2019). Prices are likely to change over time.

Golden Shotgun: Gold-colored version of the PBX Auto-Slug 4. High damage and good range for a shotgun in primary fire. Secondary fire is much less accurate, but rounds ricochet off of surfaces, doing damage to the surface(s) they hit as well as any NPCs struck.

Renegade Rifle: Visually modified, white-and-gray version of the SW7-PBA Assault Rifle. Primary fire is a three-round burst, medium-range battle rifle. Secondary fire is the ability to spawn up to five drones, one at a time. Drones each have a mini machine gun, are quite agile, and follow Rico up to a certain distance. Drones can be spawned to attack certain objects, such as but not limited to Chaos Objects, occupied enemy vehicles and enemy infantry. Drones are "told" where to go by being released while Rico is aiming at the above types of objects.

The Dragon: Rocket launcher that can also launch mines. This was the winning design in a fan contest to design a DLC weapon.

Neon Racer Pack: This was at first one of the pre-order items. The pack contains a purple wingsuit, parachute and sports car. The car has a "boost valve" (probably the same as the "nitros" on many of the default vehicles).

JC3 model of Rico: This is a free DLC that was made available in April 2019. It can be enabled and disabled in the same in-game customization menu that also activates different types of wingsuits and parachutes (if any are available).

Black Market (JC4): This is an in-game DLC advertisement that has been announced to release a new special vehicles pack each month for a year.

Legacy Pack: This is a free DLC that downloads automatically in a patch.

Many different wingsuit and parachute skins: In total, there must be about 30 of them, but we haven't bothered to count.

"We've also added a little gift for all you double denim fans out there. Included in the patch update is a free Legacy Item – The Just Cause 3 Rico outfit! This is just one of the free Legacy Items we have planned. We hope to share more about Legacy Items soon. You can access the JC3 Rico skin from the updated customisation menu.

"We know that a lot of fans have asked about DLC and future content for Just Cause 4. We have put together a roadmap that shows some of the upcoming updates to the game. We will of course be sharing news on DLC3 and other content down the line closer to their launch. Please note that some of these timings may change but we will keep you up-to-date via this blog."

"As you can see, we’ve split this timeline between free and premium content. As well as the expected DLC packs we’re also going to be releasing more legacy item updates for free, and continuing to patch updates into the game."

"We are also pleased to reveal that we’ll be launching a free monthly challenge program starting with the launch of DLC2. These Monthly Challenges will test even the most skilled JC players. Completing each challenge will earn you cosmetic rewards for your wingsuit & parachute – we will be talking more about Monthly Challenges closer to launch."

Just Cause 4 currently has a total of 3 larger expansion packs.

Examples of news articles about the DLC packs: 1 and 2.

There are 3 underground gangs who used to make money by smuggling forbidden items during the Espinosa regime. This was a lucrative business for them, so they're not happy with Rico and his Army of Chaos. Rico now tries to win their respect by taking on their destructive motoring events. The events unlock a number of different weaponized sports cars.

In this expansion an ancient demonic threat is released from Isla De Los Annilos and Rico has to fight off swarms of giant insects (Demons) and defeat infestations of huge plant-based enemies. The story also expands the lore of the Qacha people and provides new weapons: Demon Crossbow and Demon Egg and Tendrilizer.

This pack was initially known as "Danger" and as "Agency Strikes Back".

This will be the third expansion pack for Just Cause 4. The Agency returns, bringing with them advanced technology, secret weapons and specially trained operatives. Agent Miller is sent to Solís, commanding a big task force of several large submarines from the USS Statesman. He is tasked with hunting down and eliminating the former agents Rico Rodriguez and Tom Sheldon. The DLC ends with a relatively big reveal.

The DLC is released on August 29 (or September 5, depending on the game version / expansion pass ownership).

The final editions of the game, named "Reloaded edition", "Gold edition" and "Complete edition" were announced on 2019.11.07. Some pre-order items were added to the previously existing gold edition and the other two are completely new bundles.

See the pictured table for a listing of what each bundle contains.

This section features leaked information that is very likely subject to change.

A leaked supply drop image from march, or april of 2019 showed a number of future DLC items. Most of the listed items have already been released since the leak occurred:

The only still unknown item is the armored train, resembling the Black Hand trains with smaller turrets. The AR scan shows the same symbol on Army of Chaos turret train cars.

Initial poster for the expansion pass.

Gold edition information, if you order from Amazon, or BestBuy. 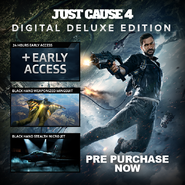 Pre-ordering from Amazon, or BestBuy includes a digital map.

Support drone from the Renegade Pack.

Holiday themed wingsuit. Added as some free DLC on December 16th, 2019.
Add a photo to this gallery

Start a Discussion Discussions about Downloadable content for Just Cause 4