Driving Miss Stacey is a Reapers mission in Just Cause 2.

One of the Reapers seductive informants, the wife of one of the Reapers captains, has been discovered by a Panauan general, who goes by the name "Boom Boom" Bohulano. The mission starts after activating the marker. Your objective is to steal a limo and use it to drive the Reaper undercover agent, "Miss Stacey", to a safe drop off point.

Bolo Santosi will often call Stacey a 'slut' and a 'whore', throughout the mission dialogue.

Rico is told that Miss Stacey refuses to enter any vehicle other than the pink Columbi Excelsior. Reaching Miss Stacey is easy and she'll enter the limousine. If you drive the limo and are forced to abandon it, Stacey will exit with you and enter the vehicle you grab instead. However, on the road that leads to the rendezvous point, you'll encounter the Panau Military at a Roadblock and worse, General Bohulano. Furthermore he is armed with a Rocket Launcher. Maneuver around the rocket (which is not difficult) and you'll encounter no further problems. Killing Bohulano makes no difference. However, if you do decide to kill him, the easiest way to kill him is to run him over, then you will not have to get out of the car. Reach the destination and she'll exit, at which point the mission ends. 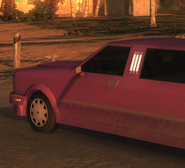 She can have the appearance of any exotic dancer/prostitute, so you're likely to see a different character model when playing the mission again.
Add a photo to this gallery

Retrieved from "https://justcause.fandom.com/wiki/Driving_Miss_Stacey?oldid=163025"
Community content is available under CC-BY-SA unless otherwise noted.