The eDEN Airship is a location and stationary vehicle in the Sky Fortress DLC of Just Cause 3.

It's an enormous flying ship owned by the eDEN Corporation. The ship is well armed with many energy beam weapon turrets.

It has a blue stripe running across the sides. It has an ATC like superstructure on the deck, which is probably why Rico thinks it looks like a tanker. Underneath the ship are Bavarium Refineries and other industrial looking objects. It has 6 engines, but the fans are spinning in a direction in which they're sucking the ship downward.

When approached, the top left corner of the screen that normally shows the settlement names will reveal that the ship is divided into a "Bow section" and a "Stern section".

In-game map description for the bow section: "The Bow Section of the eDEN Corporation's massive airship has two main purposes. First it's a Bavarium refinery and storage center, using Fuel Cells, Pylons and Storage Pods, which in turn feed into the airship's and the drones' autonomous power systems. It's second key objective is "Communications", which is Eden Callaghan's corporate euphemism for activities such as: Rrerouting radar signals to avoid detection, supervising the drones' behaviors and priorities, receiving and analyzing reports of suspicious (i.e., civilian or rebel) activity, and monitoring communications carried through any means that are within range, e.g., CommLink."

In-game map description for the stern section: "In the stern of the eDEN Airship are all of the engines and self-sustaining energy systems, allowing it to remain stationary on little to no fuel. This is also where raw Bavarium ore is transported by Logistics Drones before it gets refined. As both functions are critical for the corporation's future development, they are heavily guarded by Drones. As additional work-for-hire, the Black Hand also supervise the operations, even wearing uniforms donning eDEN's visual identity and color scheme, in exchange for very competitive bonus systems: the Tangible Risk Compensations (TRC's) and the Execution Rewards (XR's) paid as a commission for each eliminated target."

After the missions there will still be swarms of hostile Drones above and below the Bow Section and above the Stern Section. However, the Black Hand can no longer be found.

The ship has loudspeakers that frequently make announcements. The voice echoes so much that it's incomprehensible.

The large hatch in the middle of the rear deck can be opened by destroying the 2 control consoles near it.

At times it's difficult to tell exactly what gave Rico Heat on the ship, but it seems that there's multiple heat sources. If there is no heat, the Black Hand soldiers will not attack and it's safe to hang out with them in that area. This sort of safety usually doesn't last long, thanks to the drones. As long as the ship has not been completed, there's a lot more drones, so heat can be near constant, but after the the ship is complete, there won't be any more Black Hand, or Suppression drones.

Heat is caused when:

The following areas are safe from heat, unless a drone sees you, or unless you destroy something:

This is one of the Stationary vehicles and as such, if it moves at all, then only in a mission cut-scene. At all other time it's completely stationary, just like a building.

The ship has 6 large fans on its sides, but as seen in the gameplay video (below), these spin quite slowly and in a direction in which they're pulling the ship down. How the ship floats is unknown. There's two big jet engines in the rear to push it forward. The fans move a tiny amount occasionally for some reason, presumably to hold balance.

It appears in the sky if you have the Sky Fortress downloadable content.

It appears north-west of Insula Fonte and possibly a little lower than the top of the highest mountain. Approaching the ship reveals (at the left upper corner of the screen) that the ship is designated as a province and the two sections of the ship are as settlements.

The ship has several completion items, just like any other settlements.

The stern section also has enormous cone-shaped objects under it that explode when damaged enough, but these do not count for completion.

Front of the ship in the Sky Fortress trailer.

Front of the ship in the Sky Fortress trailer.

Rico on his way to the ship in the Sky Fortress trailer.

Enemy soldier and a drone with a Bavarium rock. 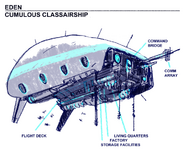 Early concepts made in 2015.
Add a photo to this gallery

The ship can be seen from the great distances. View from the north of the Unnamed industrial facility at N 40 46.590 E 5 37.400. Also note the Train and the Insula Striate wall.

Seen next to the Moon.

Under the stern section.

One of the "Anti-Air Cannon" turrets near the front end.

A Bavarium pylon at the underside of the ship.

Front of the airship viewed from a flying platform.

As seen in Suit Up, barely visible in the clouds at night.

The airship just an ant in the sky, seen from the Hive at night.
Add a photo to this gallery

In the mission Suit Up. Rico thinks it looks like a massive Tanker.

In the mission Suit Up. Rico knows a Bavarium-powered flying ship when he sees one.

Communications jamming antennas, as seen during the mission Taking Control.

Big explosion under the rear end.

The Large-Scale Fragmentation Device.
Add a photo to this gallery

These areas can only be explored during missions. There are windows through which it's possible to see the "creepy garden" and the "drone warehouse", but the room with the frozen labs can only be seen in the mission.

During the mission Severance.

During the mission Severance.
Add a photo to this gallery

These spotlights appear all over the airship and track the player while they're in the air. They remain even after completion of the airship.

Completing the airship also reveals that it's programmed as a province.