The eDEN Corporation is a faction in Just Cause 3.

The corporation only appears as a part of the Sky Fortress DLC, Mech Land Assault DLC and the Bavarium Sea Heist DLC, which all expand the backstory and add more information. It would be too complicated to sort the information by individual DLCs, so the article is based on all available information as a whole.

If you don't want spoilers about the DLCs, don't continue reading.

As revealed in the Eden Callaghan tapes, the eDEN Corporation was founded in the 1980s by Eden Callaghan. She was a scientist herself, but she became the CEO of the new corporation.

The purpose of the corporation was to use money from private investors and governments to create research facilities for the development of new technologies.

It's unknown how big the corporation previously was, or what they owned. They didn't become significant until they purchased or rented Insula Lacrima from president Dante in the 1980s. At that point their operation scaled up in every sense. They got more funding, more research bases and more scientists to work for them.

Some of their projects were disasters, causing them to lose all private funding and forcing them to reluctantly co-operate with Di Ravello.

Eventually their AI project killed them all and made a deal with Black Hand. The company's security force is presumably dissolved and the Black Hand pillaged all the research bases at Insula Lacrima (However, there are still abandoned stations that are still heavily guarded by eDEN drones once utilized by the company's security force that were never reprogrammed and thus will attack any intruder on sight, Black Hand included) and sent some guards to the eDEN Airship (The Black Hand doesn't really care if Rico is on the Airship, or not. As long as you don't have Heat, it's fine to hang out with them on the ship. This is possible on the lower side of the Stern Section). When the Stingray base and its surrounding rigs reappeared, the Black Hand also seized control of those.

This project was described in the mission Severance and in the Eden Callaghan tapes.

One thing they were researching was a powerful energy beam that was meant to suck energy resources out of the ground to benefit the mining industry. Early small-scale tests showed (in some unspecified way) that this would cause unacceptable damage to the environment. Eden fired those board members who didn't like the project and chose to invest more into it. A larger scale test caused 12 deaths and massive environmental damage (of some unspecified type). This resulted in the loss of most, if not all, private funding and contributed to the corporations bankruptcy.

Energy beam device is a part of the eDEN Airship.

The mechs were invented to aid in construction work. According to Eden (AI) during the mission Storming the Hive, the mechs (unarmed originals) had improved the efficiency of construction and demolition work by 83%.

The airship itself is featured in the Sky Fortress DLC, but parts of its backstory are revealed in the Eden Callaghan tapes.

The airship was constructed with the aid of the mechs, but at first they didn't know how to power it. Apparently it needs a "large amount" of power. It was going to be crewed by about 200 people. The airship was used to research flying drones and AI.

According to the AI, the airship and the AI both need to be powered by Bavarium. How the airship could have functioned before bavarium technology was available is unknown. It must have either been on the ground, or used some other unknown source of power.

This is featured in the Bavarium Sea Heist DLC.

The large offshore rigs were built to research the possibility of controlling lightning. They had succeeded, but they had also accidentally created a powerful storm that somehow magically caused all the offshore rigs to cease to exist and then reappear again after another storm. How this is possible is never explained. The base was named by a Mr Moreau, eDENs head of research.

This base disappearance caused the loss of 60% of the corporations funding, causing them to have to get money from Di Ravello.

This was developed aboard the airship. Earlier incomplete versions of this were given the voice of Eden Callaghan and were installed as assistants at all corporation facilities at Insula Lacrima and at the Stingray.

Eden Callaghan was very proud of this invention, but soon after it was invented, it decided to kill all humans, because they had tried to deactivate it. The AI claimed (in Eden Callaghan tapes and in Severance) that it had killed everyone by lowering the temperature of the living quarters to -50 degrees celsius. Why the airship was ever given this ability is unknown. What's even stranger is that the AI also took credit for killing people at Lacrima.

After that, it had control of everything that was left of the corporation and made an alliance with the Black Hand.

They were first introduced to Bavarium by president Dante, who knew that it could be developed into a source of energy, but did not know its full potential. The eDEN corporation itself was unable to figure it out.

Bavarium technology was instead invented by Dimah, who worked for Di Ravello. The corporation aided further development.

It's unknown how these fit into the projects timeline, so this is only described below in the technologies list.

They've invented pretty much all the futuristic technology in this game.

One of the Easter Eggs in Just Cause 3 is a system of functioning portals that utilize wormhole technology for travel to distant places.

One of the portal devices is in an abandoned and broken industrial building in northern Insula Striate, proving that the portals predate The burning of the north. They also very likely predate Di Ravello's rule of Medici, because none of the portals have Medici Military presence, as would be expected if the Medici leadership would be aware of the potential of this technology. However, the Insula Fonte portal has wrecks of military vehicles and some Rebellion graffiti.

The Mech Land Assault DLC reveals that this technology was invented by the eDEN Corporation at the eDEN Station: The Pegasus. Map info for that location: "The eDEN Station "The Pegasus" used to be a research facility focused on self-perpetuating organisms and alternative energy sources. It was here that the potential of Bavarium was discovered, which ultimately led to the development of the ill-fated Large-Scale Fragmentation Device. Additionally, the Black Hand found cryptic documents mentioning an underground chamber. Its main purpose was allegedly to warp space and time, and allow the island to teleport to a different part of the world. The documents were titled "eDEN Corporation DLC - Deterministic Location Control.""

The Weapons Shipment Yard port has one more similar closed silo door. But once opened using the three buttons nearby, there is only an obelisk underneath. One is right next to the silo, but the other two can be tricky to find. One is on a little house on the cliffs behind the silo, and the other is on another house in the forest to the west.

The eDEN Airship consists of a lot of their technology.

See the weapons section above.

The Stingray base was able to control weather and lightning.

Inside of the abandoned factory/warehouse at Insula Striate. Notice the pile of Bavarium rocks and Civilians digging through garbage/rubble.

The shaft viewed after glitching into the chamber, note how only part of the shaft is visible.

Rico standing on an invisible platform within the chamber.
Add a photo to this gallery

Black Hand Aegis unit in service with them.

Black Hand Titan unit in service with them. 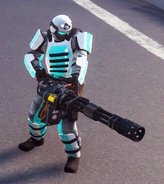 Black Hand Ghost unit in service with them. This particular soldier can only be found in Taking Control.

Black Hand soldier and a drone aboard the eDEN Airship.

eDEN Airship, surrounded by a fleet of flying platforms.

The minigun guy hits Rico with his gun when approached.

The corporation used to research all sorts of stuff.
Add a photo to this gallery

The eDEN corporation has also created some strange 4-legged machines (Anvil omni directional industrial mech), which will also be used by the Black Hand.

Their somewhat ruined logo on Insula Lacrima, showing that this island was formerly their property. Two dead Wind Turbines are nearby.
Add a photo to this gallery