EL gas is the oil and gas company in Just Cause (1).

For any of the oil-related things in Just Cause 2, see: Panauan Oil.

EL gas is a large corporation which harvests the natural oil in San Esperito, refines it into fuel and then sells it. A large percentage of the San Esperito oil is sold internationally. There aren't any large enough ports in San Esperito, which could service the large Tanker ships that visit the offshore rigs.

According to an article in the San Esperito national newspaper, the Gaceta Nacional del San Esperito, EL gas is doing an excellent job. The article: "Scientists all agree: EL gas is the best gas in the world!" Ironically, this good news is overshadowed by unrelated bad news. See the newspaper page above.

EL gas is most likely a private company. The Guerrillas never attack any industrial sites in missions, but if there should ever be any policemen near any Pumpjacks, the Guerrillas will attack them.

The Agency doesn't pay attention to the oil company either. This could mean that United States is an importer of San Esperito's oil.

Everybody who works at the off-shore rigs, gas stations and pumpjacks is a civilian.

Offshore rigs are drilling and pumping stations for extracting oil from underground reservoirs.

EL gas operates several large offshore rigs. The rigs are often visited by large Tanker ships, which export the oil. There are two different rigs. The rigs of the first type are shaped like squares and the others are shaped like rectangles. The rectangular ones are about 3 times bigger. All rigs have civilian workers on them. There are also several Red Barrels on them. Wikipedia article: Oil platform.

Pumpjacks (link to wikipedia) are the machines that pump oil out of the ground. San Esperito has at least two oil fields. Both consist of randomly arranged pumpjacks and oil pipelines. The pipelines disappear into the ground. All equipment is indestructable. The Los Guererros oil field has a few civilians spawning around them and being near them triggers industrial noise, that can also be heard in the industrial parts of Esperito City.

EL gas runs many gas stations all over San Esperito. They're all unmarked on the Maps, so it would be very difficult to find them all.

Be careful not to crash your vehicle into a gas pump. A crash will cause a powerful explosion, which kills everybody near the station. The gas stations stay destroyed forever, if you save the game after destroying them.

There are several systems of pipelines in different parts of the nation. Unlike the pipelines in Panau, these can not be destroyed. Most pipelines are under ground, so they can only be seen near some pumpjacks and oil refineries.

There are several large industrial buildings in San Esperito. Each has two large chimneys. They don't all have pipelines near them, so only some of them belong to EL gas.

A Tanker ship at one of the offshore rigs.

Guerrilla 08 Camp Laguna safehouse. The Los Guererros Oil Field can be seen in the top right. There's also a Broken ship near the safehouse.

Pumpjacks on Los Guererros Oil Field. The safehouse is at the top right.

Pumpjacks on Los Hidalgos Oil Field, view from behind. 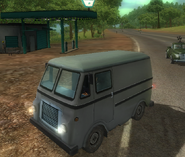 A Meyer Compact T at a rural gas station. 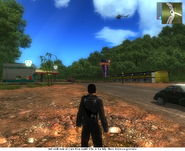 Across the road from an Estrella MOTEL at Isla Maria Dolorosa.

An unmarked "El Gas" gas station and small Market located near the Encarnación military base.

An unmarked "EL gas" gas station with a big storage tanks, and Estrella MOTEL to the northest of Puerto Pascual, village on Isla de la Asuncion. 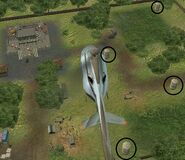 Storage oil tanks inside of Villa Alegra,Cartel villa,In many Settlements on Los Hidalgos there are many of this storage tanks.
Add a photo to this gallery

Retrieved from "https://justcause.fandom.com/wiki/EL_gas?oldid=117890"
Community content is available under CC-BY-SA unless otherwise noted.