An Easter Egg is an intentionally hidden message to be discovered on purpose or by accident.

"So you know, you work on a game for so long, you have to have those days of joy. In fact, a little while ago we said to the whole team: "Like hey guys, whatever you wanna put in the game and hide, you can do it." And so we'd spend some days developing all sorts of crazy stuff that's gonna be in there cause we have so much fun making this game and hopefully that comes through in how the game works and feels. It's hard to say "no". It's really quite hard to say "no", I mean they are so funny and it makes you quite happy just to allow all that exuberance and enthusiasm in developing the game to get in there and we hope the fans like it too."

Island from the TV show "LOST"

There is an island located on the top left hand corner of the map that has many references to the popular TV show: LOST. On arrival to the island (if Ular Boy's mission "Stranded" is not completed), anything you are flying in or any boat you are driving will catch on fire and crash and almost immediately after you enter the island it will start to rain; there is also a crashed airplane located near the beach.

He can't be seen in most parts of the island, but will spawn when you go to the approximate area: X:2170; Y:1420. Some also claim that you can hear the Smoke Monster sound effects while walking through the jungle.

Also there is a rock that you can stand on at the location X:2275; Y:1680. This location has one of the highest spawns.

He appears as a Panau Elite Soldier and is followed by a cloud of smoke. He will never attack you but will try to follow you wherever you go on the island. He isn't invincible, he just has a lot of life so he can be killed. He'll get into your car but not into an aircraft. It is possible to get him to Tanah Raya: Get him to follow Rico to the shore of Hantu, and start swimming toward mainland Tanah Raya. If you can avoid/defeat all the patrol boats (you will always have heat) and are persistent enough with swimming, you can go all the way to mainland West Tanah Raya. He will still follow you but will not emit smoke. You can still drive him around anywhere and the Panauan Military will not attack him.

The Japanese soldiers don't seem to like him. They won't shoot directly at him, but you can't get rid of a Japanese heat level as long as you're with him; see a video about this at the bottom of the page.

It is also possible to spawn multiple smoke monsters by patrolling around the area that triggers its spawn. Also it can not go on bridges.

When killed, it supplies a grenade.

There are hostile WWII Japanese Military soldiers spread throughout the island. They have a network of towers, bunkers and sophisticated electrical systems that connect to a mainframe EMP tower.

This island is later revealed to be "Hantu Island" in the Ular Boys faction mission Stranded. This island supposedly carried Emperor Hirohito's secret weapon, an Electromagnetic Pulse machine (EMP), which the Ular Boys inadvertently send you to destroy. Once this mission is complete, all effects that were observed before the mission was completed will no longer apply, removing the shroud from this island forever.

Top of the world

If Rico reaches the highest point in Panau (the Snow Peak), Rico will say : "Look, ma! I say look! Top of the world! Again." The "again" part is added the second time he's there, so this happens only twice per playthrough.

Mysterious islands on an old map

This must be some kind of a beta map, because the game doesn't really have anything that far in the north-east, where this map has 1 island and 1 dot that might be an oil/gas rig. The file was uploaded before the game was released.

Ship in the desert

It's rusty and broken in half. Located at about X:10420; Y:23490, in the Lautan Lama Desert. There's a small village next to it and a road leading to it. The settlement doesn't get a map marker, so you can't get extracted there.

Some believe it to be a reference to "Battlefield: Bad Company 2", but that's unlikely because "Battlefield: Bad Company 2" was released just 3 weeks prior to Just Cause 2 and considering that the ship features in an Agency Mission, it would have required substantial work on the part of the developers to create such a reference so late in the game's developmental stage.

This ship might also be a reference to a cargo ship in the 1977 movie "Close Encounters of the Third Kind ". "Battlefield: Bad Company 2" was probably also referencing that movie.

Most likely, it is a reference to the abandoned ships in the Aral Sea , which was once one of the 4 largest lakes in the world but shrank rapidly after the rivers emptying it were diverted for irrigation by the Soviets in the 60s. "Lautan Lama" means "Old Sea" in Indonesian, furthering this claim.

It is also less likely a reference to a book called Holes written by Louis Sachar where the main character finds a boat in the middle of a desert in Texas.

Though not much of an Easter Egg, there is a hot air balloon which you can ride. It is located at these co-ordinates: X:7390, Y:16150. To ride it, you must shoot the 4 sand bags at either side, and then jump into the basket. Then you press Y/Triangle which lights the burner, to actually control it, you must rapidly tap Y/Triangle and run into the direction which you want to travel, although it is quite slow. If flown over the LOST Island, you will hear the sound of the crash, and a helicopter propeller will fly randomly away, though you will not crash. This could be due to a possible glitch where the helicopter physics and model structure were put under the cosmetic outlining of the hot air balloon. It is also shown as a "?" on the map provided with the limited edition of Just Cause 2.

A bubble gun named the "Happy Bubble Blaster" can be found inside a tower located at these coordinates: X:4245; Y:25978. It does absolutely nothing to enemy soldiers but increases your heat level. Surprisingly, it seems to use ammo from your other one-handed weapon.

This is a beached whale easily spotted from the air. When smacked with the grapple melee it explodes (does damage if standing on top) to reveal an armor part.

A strange sign made with bananas saying "BANANA FAIL" can be found at these coordinates: X:21898; Y:20254. The sign can be ruined by moving the bananas.

A race track called Bandar Selekeh can be found at: X:9170; Y:11413. Titus ZJ's can be seen driven around the track by soldiers from the three different factions. Near the pit stop area there are two garages, one of them is occupied by a Mancini Cavallo 1001, which makes the aiming box red.

At X:11262; Y:4147 there's a large bumpy dirt road race track that crosses the nearby highway. It's similar to but more complex than the race track at Bandar Selekeh, featuring two jumps, shortcuts, crossing levels and varying terrain. Because the road is made of dirt it's almost impossible to spot the track from the PDA map.

There are two Titus ZJ's and a few gas depots. Titus is a great car for street racing but almost useless on the bumpy terrain so it would be a good idea to steal an ATV or Jeep from the nearby highway to use in racing, if not for the fact that they are not fast enough to make the jumps. The race track takes about two minutes to complete and jumps across the highway at two locations. It's a very hard track and you need speed at many times due to large ramps you must take to continue the track.

There's another dirt road race track at about X:29800; Y:15800, but there's no vehicles there. Only a billboard of Pandak "Baby" Panay. There's also a large natural ramp that doesn't lead anywhere.

There's a Ski Resort at about X:23810; Y:13470, covering a large area. The snowman is at the highest part of the resort. Rico can talk to it, using the interact button (depending on the game version "E", "Y", or "Δ"). He will say two phrases: "Hello Mr. Snowman" and "Hmm, looks like Blaine. Got the same face." After that, he just repeats himself.

If you grapple on to a billboard with Baby Panay on it, you can grapple close to his face and the press the interact button (depending on the game version "E", "Y", or "Δ"). Doing so will make a moustache and glasses appear on Panay's face, as if Rico drew on it with a black marker.

A good place to look is the Reapers HQ. It stands out because Reapers practice firing at it.

Ride of the Valkyries

While piloting a helicopter, if you maintain sustained fire for more than about 20 seconds, Rico will hum a section of Wagner's "Ride of the Valkyries". This operatic piece is a reference to the movie "Apocalypse Now" and as a result of the film is commonly associated with helicopters in combat. This easter egg returns in Just Cause 3.

There are vending machines for 1337 chips in all Gas Stations. This is a reference to "Leet" (link to wikipedia), an odd language used by some people, mainly on the internet.

These ruins are 2 roofless hut ruins at the bottom of the sea. They're in shallow water, next to the Kampung Teratai Putih village in West Tanah Raya at X:9210; Y:10050.

There may be more underwater ruins, but we have yet to find them.

The statues of Pandak "Baby" Panay, which are found all over Panau, resembles strong to a previous statue of Saddam Hussein in Iraq, which was torn down during the mission to take down the regime, in 2003.

There are small rings of concrete with broken wires in the middle, in two rows along the river.

The tires on many sports cars, the Stinger Dunebug 84 and the Chevalier Ice Breaker are labelled "Avalanche Sport" referencing Avalanche Studios. This is similar to the "AVALANCHE" tires in JC1 (see near the top of the page).

The Cable cars closely resemble the ones from 2003 spy-comedy "Johnny English".

The Hamaya Oldman is said to have been named after Mike Oldman, the then Community Manager at Avalanche Studios.

The game "Sleeping Dogs" has a radio commercial about Panau Islands as an easter egg, suggesting that Sleeping Dogs and Just Cause exist in the same universe.

The ruins are a flight of stairs leading nowhere. It is floating about 3 metres in the air. If looked from below, it appears transparent.

Actually, this one should be at Just Cause 2 Bugs and glitches, because it's not a reference to anything. It's just a map design error. 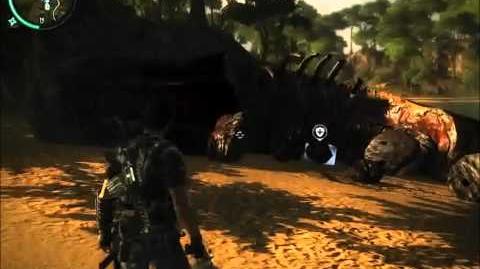 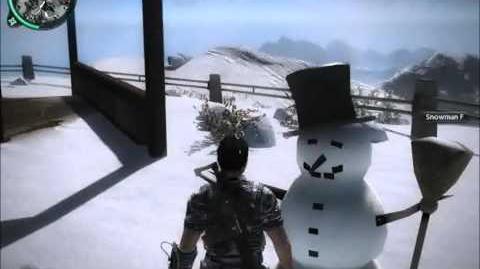 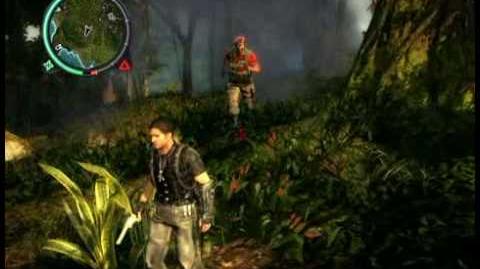 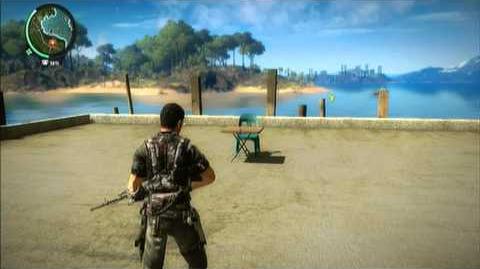 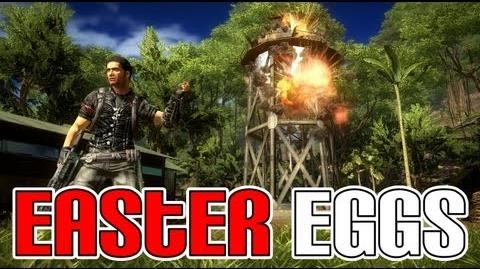 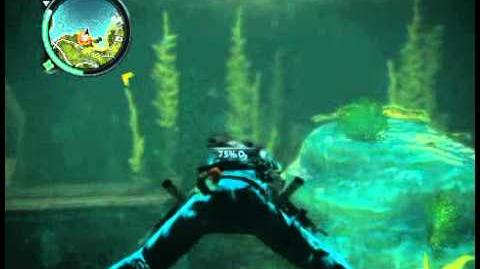 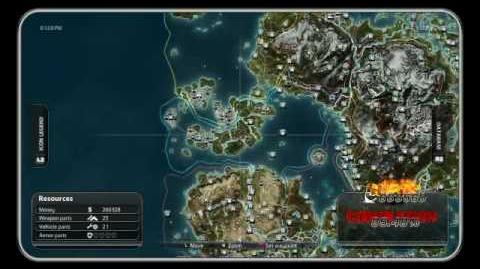