Start a Wiki
watch 01:51
The Loop (Games)
Do you like this video?
Quality level:

The El Grande Fort is a government penal institution in Just Cause (1).

Either way, the architecture and the name both suggest that this building is an old fortress.

It's an old fortress that's now a prison. It was most likely built by the Spanish when they colonized the islands a few centuries ago.

This is one of only two prisons in San Esperito. The other being the prison a.k.a. Secret Police headquarters in Esperito City.

José Caramicas was imprisoned here before the events of the game. He was sentenced possibly for life after an unfair trial and was escorted to El Grande under armed guard some time shortly before Thursday April 20, 2006 (however the game dates are messed up). He is rescued in the storyline mission Breakout, which takes place here. Caramica's sister Esperanza claimed Jose's life could be in danger at El Grande. Maybe she was right, because when Rico found Caramicas he was tied up in a chair, blindfolded and had been beaten.

For reasons unknown, the PC and Xbox versions of the game have completely different forts. The only area they share is the gate area on the northern side of the fort, which has multiple Guard Towers, wire fences and small buildings.

The main building is a large 3-story building with 8 corners. A small section of the northern part of the building has 4 stories. The building has inaccessible prison cells along all its walls and a courtyard in the middle. This is a panopticon-type prison where the courtyard has two steel bridges that connect the northern and southern sides of the building and the eastern and western sides of the building. The idea is that guards who are stationed in the middle (on the bridges) can easily keep an eye on all the cells. The cells have large barred windows to aid this. The building also has several enterable staircases. José Caramicas is kept on the ground floor of one of these.

Just outside of this building is a relatively narrow moat. Should the player manage to fall into it, it will be impossible to escape, so the player has to reload the latest saved game, or mission checkpoint.

Beyond the moat is a wall, about half as tall as the building. This wall also has 8 corners to neatly fit around the building.

Connected to the wall are three strangely-shaped bastions that extend out into east, south and west.

The southern bastion is very low (for a bastion) and is in use as a dock. A set of steel stairs connect this bastion to the top of the southern wall of the main building. The dock has a Guard tower and the prison's only vehicle, a Pequod - Harpoon PC 350. This vehicle no longer spawns after the fort is taken over by the Guerrillas, after the mission Breakout.

There are additional modern breakwater structures, with wire fences on them, that connect the tips of the bastions to each other, but strangely, there are gaps in both of these that allow boats to cross them. At least the player won't be trapped when falling here, but the gaps make these additional wire fences rather pointless.

The main building is again 3 stories tall, but this time it's shaped more like a middle-ages style fortress with 8 large rectangular towers, arranged symmetrically and a large wall connecting them.

The space between the most southern 4 towers is entirely a large enterable building, as tall as the outer walls. The other 6 towers have a large courtyard between them. The northern end of the fort has a large west-to-east wall that completely blocks the gap between the hills on the sides of the fort.

The large enterable building at the southern end has a helicopter landing pad (same design as at some Safehouses) and one of the letter E-shaped radio masts (that can also be seen at some Military bases in San Esperito) on its roof. Inside it are multiple rows of inaccessible prison cells and the cell at which José Caramicas is detained at the beginning of the game.

The center of the northern wall has a large partly enterable building that serves as the forts main entrance. This building has a Mounted Gun facing the courtyard.

Just south of that is the courtyard with a basketball court along the western wall and a watchtower in the middle. The courtyard also contains multiple smaller stone walls that divide it into smaller areas.

The most northern section of the east wall is an inaccessible building. This building has a wide window on its external (eastern) side, overlooking the prisons dock. There are stairs on the outside of the building, leading from the courtyard to the roof. A small hallway through this wall connects the courtyard to the dock.

The dock has a Guard Tower and seems to have some kind of an oval barge, which is probably a Stationary vehicle.

The western wall has another probably inaccessible building.

The prison is located in Provincia Aguilar, directly north-west from the Agency 01 safehouse. The prison is on a small island next to the Salt refinery. It's possible to see the town Santa Isabella when looking over the water to the south-south-east from here.

Both bridges that lead to this island have roadblocks and you will always get level 3 Heat while passing them. During the mission, the prison will spawn infinite soldiers. The prison is taken over by the Guerrillas either after the mission Breakout, or when the province becomes "guerrilla stable".

However, police will still man the mounted guns on the guard towers at the back and the front of the prison and prison guards will still spawn here. This indicates that the prison is still in use under the new regime.

Some somewhat rare versions of vehicles spawn here. Note that these vehicles are most of the time confined to this general area and sometimes they will even stop pursuing you if you get far away enough.

Side of the building.

The inside of the main building. 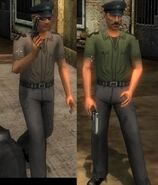 The guards within the prison use Harker 357 Sawback revolvers.

The town Santa Isabella. The fort can be seen in the upper-right corner of the picture.

At night, seen from south.

A San Esperito Police Department Triton - G3 Taiphoon near the fort, next to the Bald Eagle Persuader.
Add a photo to this gallery

A couple of scenes in the fourth trailer for the game are from the Xbox version of the fort:

Xbox 360 version (shooting at the courtyard and then exploring the southern building):

Xbox 360 version (shooting into the courtyard from the northern building and then exploring the ground floor of that building):