Electromagnetic Pulse is a mission in Just Cause 3.

For anything else related to EMP, see EMP (disambiguation).

Mission briefing on the map: "A powerful EMP Cannon protects Corda Dracon from rebel assault by disabling and destroying any vehicles that come too near the base. Dimah believes this weapon derives its power from an underground facility."

It is advised to bring lots of grenades and rocket launcher ammunition.

Dimah is chilling at the ruins near Guardia Massos V. She nearly walks off a small cliff while explaining about the EMP, but gets stopped by Rico.

Follow the pipeline to the target area. The pipeline will pass through a tunnel with orange lights and then you reach a place guarded by 2 Medici Military CS Powerrun 77 boats and 3 additional soldiers on the ground. Kill them all. Take cover behind the rocks and the rusted ship if needed.

Then dive where the pipeline ends. Under water is a large round blast door. Dimah will open it remotely, allowing you to swim in. Get air as soon as you get to the top of the underwater tunnel. The tunnel leads to a large unguarded room.

Walking through it, the next room has a few scientists at work. Rico asks Dimah if they're colleagues, to which she asks if that's Rico's idea of humor. Strangely, the room has a truck trailer and a some rebel graffiti on a column.

The blast door leading to the next room can not be opened, because the hackable console is broken, but Dimah tells you to use the tunnel. The tunnel is shaped like the letter U and leads to the next room.

The final room has 5 soldiers guarding it, including 2 Black Hand ghosts. Kill them and then destroy the "command nodes". The command nodes look the same and take as much damage as the ones in The Secret of Vis Electra, but this time there are no helpful Red Barrels around them. They each take about 5 grenades worth of damage before exploding with bright blue light. Or you could use GE-64.

To leave the facility, Dimah opens the final blast door, directly above the tunnel. This exposes a vertical 100 meter tunnel with visible sky. This final exit tunnel leads to the top of a small hill right next to Guardia Capite I.

The vertical exit tunnel will still be there later, but the final blast door will be closed.

Scientists. How did the trailer get here? Also, rebel graffiti? 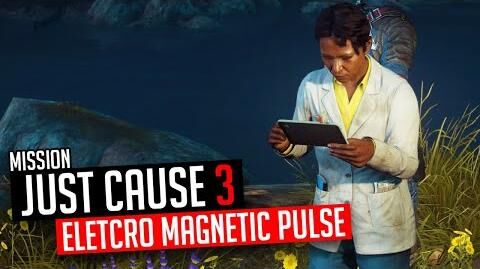