Emas Hitam Oil Refinery is an oil refinery and faction stronghold in Just Cause 2.

Emas Hitam means "Black Gold" in Malaysian. This is referencing Panauan Oil, as it is very valuable to Panau and the world.

This stronghold is conquered by the Roaches during the mission Oil for Blood.

Most of Panau's gasoline is refined from fossil sludge at this location. It is a big oil refinery filled with many destructibles. It has many Oil Cisterns that can't be destroyed, some buildings and one helicopter landing pad (note: Immediately after taking over the refinery, there is a military chopper on the pad. Later on though, this chopper is gone). It's located in a small valley. Before being refined, the oil is stored in the nearby storage facility Pekan Hutan Buluh.

This is one of the best spawn points if you need aircraft. Just 700 m north, the Paya Luas airport has its runways. It is also the only military airport to spawn (almost all) military vehicles that are green-marked, meaning you won't get heat if seen in them.

Unlike its counterpart, Pulau Berapi, the refinery has no visible distillation towers. Instead, they could stored inside some of the large buildings around the compound. The refinery most likely has at least one cracking unit. Without this, a high production of gasoline would not be possible. It is also suspected that they mix up to 5% ethanol from Fuel Shafts into the gasoline.

These numbers are from the US Energy Information Administration and represents what the typical output for a refinery looks like. The only thing stated about the output from the Emas Hitam Oil Refinery in particular is that most of the gasoline in Panau is produced there.

Before the Emas Hitam Oil Refinery was built, Panau most likely imported refined products from the nearby countries, which eventually was quite expensive. When the demand eventually increased rapidly, the ruling colonial power likely insisted on building the refinery. It was most likely Panau's first oil refinery. Papa Panay probably expanded it and increased its capacity under his time. It is likely that it always has been the central refinery in Panau. Until the recent years, it produced most of the products you can get from the distillation of raw oil, but due to the disadvantage of it not being a shipping port, Pandak Panay most likely reduced its product line to for a bigger focus on gasoline production, after that the new refinery Pulau Berapi was built. Yet, the refinery eventually kept its position as the central refinery in Panau, due to gasoline being a product under high demand.

Shortly after the mission Oil for Blood, the Panau Broadcasting Company makes this announcement: "Reports from the Emas Hitam Oil Refinery, where so much of Panau's oil is being refined from crude Bruneian sludge, suffered a series of terrible accidents and multiple fatalities today. Reports of gunshots from the area are however dismissed by Police spokespersons as mere hearsay. There has been no organized crime takeover in the area.".

As stated by Razak "The Razor" Razman in the featured stronghold takeover and the above quote, it uses oil imported from Brunei, because the national production (from only 1 oil rig, the Pelantar Minyak Gerudi Besar) is very likely insufficient.

After the takeover, this refinery becomes a stronghold and as such, it has 4 special SAMs, which do not effect the completion and which will be on Rico's side after the takeover.

Differences from a real refineryEdit

The Emas Hitam Oil Refinery is the more basic of the two Panauan Oil refineries and also the only one of the two which is directly presented as an oil refinery. The refinery is lacking any visible equipment that would be used for separating the hydrocarbons from each other, such as distillation towers, isomerization units and flares for burning overflow gas, however some of the more modern refineries collect the gas, so as to not waste it. Still, the refinery is more realistic than any such facilities in San Esperito.

In Pelaut Archipelago, in a misty inlet, close to a large bridge.

Destruction of the refinery. 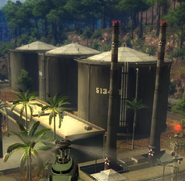 One of the UH-10 Chippewas during the mission.
Add a photo to this gallery

Retrieved from "https://justcause.fandom.com/wiki/Emas_Hitam_Oil_Refinery?oldid=140766"
Community content is available under CC-BY-SA unless otherwise noted.