Esperito City is a city in Just Cause (1).

This city is the capital city of San Esperito and is comprised of two halves. These are separate for liberation purposes. The city blocks adhere to a strict grid pattern of squares and rectangles.

According to the game manual, this city contains the parliament building, which was stormed by the army of General Salvador Mendoza, when he took power in San Esperito. This happened one week before the events of the game. Unfortunately this building can not be found in the game. Maybe the parliament operated in one of the generic skyscrapers.

It's located in the Resolucion province.

It has an industrial area, on the "main land" and a residential area with higher buildings on an artificial island.

The Prison, during the mission Dismissed Without Honors.

The mission Dismissed Without Honors. 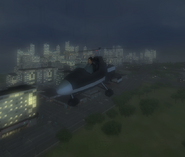 The Giant statue of Salvador Mendoza, with a Guerrilla Delta 5H4 Boxhead parked on it.

The city seen from north-east.

Carmona's MV, assuming you hijacked it from him.

Black Hand Meister ATV 4 at the Banco Nacional during Streets of Fire.

Black Hand Delta MAH-15 Chimaera on the arm of the Giant statue of Salvador Mendoza. Don't ever attempt this... unless you know what you are doing.

Two Triton Broadsiders outside this city while it is still under government control.

An unknown Guerrilla at the drop-off point at the end of Streets of Fire.

Posters on a wall to advertise local businesses.

A unique Black Hand MV with the Mounted Gun facing backward during the mission Streets of Fire.

A Black Hand soldier shooting at Inmaculada Palmiera during Dismissed Without Honors. She is NOT invincible and can be killed, resulting in you failing the mission.