The Falconer AA Tank is a tank in Just Cause 4.

It is a light tank with a four-barreled turret for shooting down low-flying aircraft. The tank also has 8 missile launcher tubes, similar to the 2K22, but these do not function in the game.

The engine is at the back and the sprocket wheel is at the front, indicating that the gearbox is at the front. This layout was very common for armored vehicles until WW2. The tracks have 6 road wheels and an identical idler. They also have 5 small wheels to hold the track up. The sides have thin skirts that break off easily when damaged.

The hull front is asymmetrical with some type of vent-like thing on the right and a hatch on the left. The hatch can be broken off to reveal cut-out with some mechanical parts. There is a hatch on the left, above a presumable drivers seat, but Rico enters through the turret. The engine-deck at the rear is a little higher than the rest of the hull, but it doesn't obstruct rearward gunfire.

The turret has guns on the sides and non-functional missile launchers under the guns. The turret roof has 2 hatches: a round one on the left (that Rico uses) and an angular one on the right. There are two antennas on it too. A stationary radar antenna and a 1 meter spire.

It incorporates the chassis of an American M8 light tank, turret of the West German Flakpanzer Gepard, although some would argue that it is a Tunguska turret, and elements of the Soviet 2K22 nose radar. One might think that it is something out of a modern hybrid system used by the militaries of some countries that received both American and Soviet weaponry.

It is very fast for a tank. The guns fire relatively quickly, but much too slow when compared to any real weapon of its type.

The tank has 300 units of ammunition, which is only 75 per gun, which is very few, but it can easily blow up most vehicles with a single hit and helicopters and other tanks with 3 to 4 hits.

It likely has the highest combat effectiveness of all JC4 ground vehicles.

The tank can turn around on the spot, but like the other tanks, the tracks are spinning in the opposite directions as it does this. See more at Just Cause 4 Bugs and glitches.

The tank is pretty effective against helicopters, but definitely not fighter planes. It's very hard to shoot down fighter jets unless they are flying in a straight line, which they mostly don't. With good lead, one can take out a large, straight-flying plane. This is realistic, as gun-based AA systems became obsolete by the 1950s due to the increased speed of jet-propelled aircraft. Gun-based systems are still operated by many militaries because they're faster and more effective than missiles at close-range engagements against low-flying helicopters and more recently also against reconnaissance drones.

Front. The hatch on the front wall has been broken off, revealing the dark cut-out area.

Left front corner. The mudguards have broke off, revealing the top of the track. 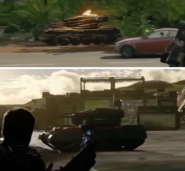 Wreck and Black Hand versions, as seen for the first time in game trailers.

In some pre-launch gameplay video.

In some pre-launch gameplay video.

As seen in the mission Windwalker: Diversion.

As seen in the mission Windwalker: Diversion.

As seen in the mission Windwalker: Diversion.
Add a photo to this gallery
Retrieved from "https://justcause.fandom.com/wiki/Falconer_AA_Tank?oldid=162563"
Community content is available under CC-BY-SA unless otherwise noted.