The Front is a game feature in Just Cause 4.

In game trailers and similar videos, the front has also been called "frontline", "front lines" and more. It's actual name is probably just "front", since that's what the game seems to call it. In real life, these terms are more or less interchangeable, so it doesn't really matter.

It's the area of the map where the Army of Chaos fights the Black Hand. There is a constant battle between the sides along the front line.

The front is marked on the map with a red line that is always at the edge of a province. Along most of the province borders it's a dotted line, but there is always at least 1 border with a continuous line. This indicates those borders where the player can choose to expand the area of the Army of Chaos control next - to the next province.

The front is usually in the middle of a flat area like a desert or grassland. It is also often on a river, with the Army of Chaos and the Black Hand on either side. The line can also exist inside of towns, or on roads.

In any front line battle scene, the following details can be noted:

Something interesting to note is that the constant battle on the front is mostly aesthetic. If the player focuses on what the combatants are actually doing (without interfering or getting heat), they will see that there are effectively zero casualties on either side. Both the Army of Chaos and the Black Hand will blindly fire towards the opposite front, and rarely do they ever hit anything. Be it footsoldiers, snipers, RPG units, combatants manning mounted machine guns (miniguns), or tank operators, combatants on both sides never aim for a single target. For them, the target is anywhere along the entire opposite front and the areas surrounding it. Soldiers/rebels manning anti-aircraft guns are often seen shooting at the sky above the opposite front. The explosive rounds will automatically detonate (as though they have some sort of proximity fuse) above the front without actually doing anything.

It seems as though NPC combatants on the front are programmed to shoot at the opposite side to make it look like a battle, but not actually advance as that would undermine the player's game progress.

If Rico interferes, however, combatants on both sides will snap out of their "aesthetic battle" mode. They'll stop shooting at the sky and the ground and start rushing each other, and when shooting they will aim at a specific enemy target.

Once it turns into a proper battle, it normally becomes obvious that the whichever side has more competently operated tanks should easily win in that area (usually the Black Hand), but the AI is not competent. The Black Hand often just parks their tank(s) and shoots at the rebels from where they are parked. Usually, the tanks will pulverize the rebels - who keep respawning as more and more are killed - before they can use explosive weapons. However, if Rico decides to help the rebels, the Black Hand will focus their firepower on Rico, giving AoC RPG operators and rebels with grenades a chance to do some damage to the tanks. Helicopters are seen as well, but they too hover so low that they eventually get destroyed by small arms fire, or more often crash into something (heli-to-heli collisions are more than common, due to their peculiar AI) and blow up.

On the frontline, Rico's heat escalates much faster, due to the already-present battle. Something extremely unrealistic is that Black Hand reinforcements will spawn in anywhere. Realistically, it is only reasonable if they arrive on the Black Hand side of the front and advance on Rico. However, the game's strange heat system makes the Black Hand immediately spawn less than a hundred meters away from the player, in any direction. So when the player triggers heat, Black Hand reinforcements may show up behind the AoC front, enclosing the rebels in a pocket. Obviously, this is not possible in real life since in order to get behind the AoC, the Black Hand will have to get past the rebel's frontline, which is impossible unless they advance. One could argue that in-universe, the reinforcements might be special forces of some sort that deployed behind the lines, but that's overthinking it. Plus, the Black Hand doesn't have a special forces unit that can be encountered in the game.

Civilians and civilian vehicles will not be present near the front, neither will they be present in no mans land (this is the area contested between the Black Hand and the Army of Chaos). However, if the front is on a road, they might spawn further away and drive to the front, if Rico follows them that way. These civilians will either turn around, or run away.

The nearest civilian settlements might at times seem empty, because the nearby sounds of fighting, or the occasional helicopters have scared them away. This happens when the front is near or in a settlement.

Things to do on the front

While speedrunning the game, a player might not even notice that the front exists, but there are many things the player can do on the front. 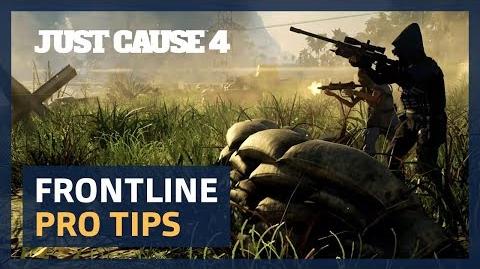