Start a Wiki
watch 02:35
The Loop (Games)
Do you like this video?
Quality level:

The G9 Eclipse is heavily armed twin-engine multirole fighter aircraft in Just Cause 2.

It can be found in a variety of colors, including green, light brown, and grey. They all have a grey bottom side. The grey variant is much darker at night.

The G9 Eclipse is much faster than the smaller Si-47 Leopard, but is much harder to take off in. It requires a 700+ meter runway to take off. At some airbases the runway has a drop-off at the end. If the player hasn't gained enough speed the Eclipse will begin to fall or otherwise plunge into terrain or ocean after clearing the end of the runway.

Takeoffs can be a nightmare if there are trees at the end of the runway, as the Eclipse will get them lodged in its forward-swept wings, causing it to explode shortly after taking off.

The top speed of this aircraft is 250.91 mph. Click here to see how it was tested.

Aside from the F-33 DragonFly Jet Fighter (which is DLC), it's the fastest vehicle in the game, making it ideal for travel. At top speed, you can cross Panau in a matter of minutes.

Because it's so fast and has a huge turning radius, it's not ideal for assaulting military bases. It's very difficult to pull up after an aerial bombardment, and most players are unable to do so.

This plane is probably better suited for early builds of Just Cause 2, which featured aerial combat (see Cut game content from Just Cause 2). Because it's not practical for ground attacks, there is really nothing to effectively use it against.

After these bases are completed to 100%, the occupied G9s at the runways will disappear, but the plane can still be found in the hangars.

Sukhoi Su-47, the real world plane that the G9 Eclipse is based on.

G9 Eclipse after take off.

The green one, about to take off at Kem Udara Wau Pantas (just above the aiming box).

A bright green one in Just Cause 2 Multiplayer with the "jethud" enabled.

One at Paya Luas. Oddly, for a grey version it has green rocket pods. 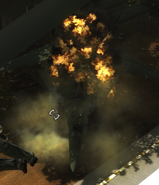 One about to explode in Death from Above.

A G9 demonstrating the extreme firepower of the gatling autocannons.

Two of the colour variations for the G9 Eclipse. The grey aircraft is piloted by an AI.

Add a photo to this gallery
Retrieved from "https://justcause.fandom.com/wiki/G9_Eclipse?oldid=160615"
Community content is available under CC-BY-SA unless otherwise noted.