The GP Thunder Extreme Prototype is a well armed off-road car in Just Cause (1). The Just Cause Demo calls this vehicle a Prototype MV.

It's based on the real world Hummer H3.

It's a pick-up type vehicle and looks like it was designed for off-roading.

The prototype is quite a sturdy vehicle for it's size and has reasonable performance, being quite fast and controllable. It has four-wheel drive in lower speeds. It also has weapons, making it even more effective.

This is a great vehicle for village liberations or military base takeovers. Just be careful for explosives (grenades, tank turret, etc) as they typically deal the most damage to this vehicle.

This vehicle's weapons are hidden. They can be activated the same way that one would normally switch between different weapons in a helicopter. The Garret Paladin also has hidden weapons, but it only has a machine gun. The GP Thunder has a longer firing range and the missile launcher makes it one of the best ground vehicles to use in a liberation mission, or during Heat.

The console versions of the game (or at least some of them) allow the player to aim vehicle weapons either manually, or to let the game auto-aim them. The PC version only has auto-aim for all vehicle mounted weapons. 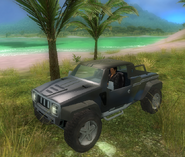 View of the underside parts.

Seen in a loading image that explains how to order a Heavy drop at the PDA. Note the Spanish language.

Agency vehicles available through Heavy drop: A Bald Eagle Persuader on the left, a Whiptail Gyrocopter in the middle, and GP Thunder Extreme Prototype on the right.

(Real), Hummer HX.
Add a photo to this gallery

Retrieved from "https://justcause.fandom.com/wiki/GP_Thunder_Extreme_Prototype?oldid=156982"
Community content is available under CC-BY-SA unless otherwise noted.