The Gunung Merah Radar Facility is a radar facility and Notable building in Just Cause 2. It's also the largest and most complex location in the Just Cause 2 Demo.

"Gunung Merah" is Malay and Indonesian for "Red Mountain", which is the local name for the Desert Peak the facility is located on.

This radar facility is a heavily armed military compound. It's a computer intelligence hub, heavy radar compound, and center of communications. It houses most of the government's intel and is very important to the Panau Military, so it's heavily protected and can only be reached by a restricted road. It's protected by 2 Checkpoints. The first, a light checkpoint near the eastern bend in the access road, has only two soldiers, one in the mounted gun of a Chepachet PVD and the other patrolling the immediate area. A civilian vehicle can also be found here. The second checkpoint is a small infantry outpost on the southern leg of the road and holds five soldiers, one of which occupies the sole guard tower. Here, a unique GV-104 Razorback can be found that has machine guns in addition to the usual auto cannon. Triggered Explosives and a Submachine Gun can also be found in their respective crates near a Medicine Cabinet. There's another Chepachet PVD, yet another civilian vehicle, and several destructible items in the vicinity as well. There's also a Switchgear section with some Generators as a power source.

This base can be hard to complete. Using a rocket-armed helicopter and blasting all over the base is recommended. The base area is quite small and the destructibles are clustered close to each other, so it will do great.

It's a little strange that the facility was placed just there, with the mountain blocking the signals from the south. Even stranger is that despite this facility's strategic importance to the Panau Military, this places hosts no SAMs.

The main building is about 66 meters high and has a small control room of about 16 square meters, which is enterable during the featured mission. There's a Sentry gun stationed there, so be careful. There are lots of locked server units boxes for the radars, data communication and other devices, but also an accessible GPS control where Rico downloads some data during a mission.

It's located in the Lautan Lama Desert, directly north of Kampung Ekor Bengkok. It's positioned about one third of the way up the Desert Peak mountain.

There's a checkpoint area on the road that leads to the base. A Broadcast Tower and a Generator are found there, but these are not counted as a part of the base. 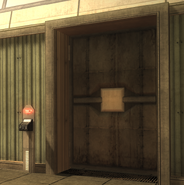 The interior of the control room, only visible during the mission that takes place here.
Add a photo to this gallery

Retrieved from "https://justcause.fandom.com/wiki/Gunung_Merah_Radar_Facility?oldid=146381"
Community content is available under CC-BY-SA unless otherwise noted.