Gunung Tasik is a military facility and notable building in Just Cause 2.

﻿This is a unique location. It has what looks like an offshore rig and habitation pods in a frozen lake on a mountain. The name means "Lake Mountain" in Malay. Possibly alluding to this lake being on a mountain top.

There are three SAM sites located here: One on the drilling rig, one west of the rig and one south-west of the rig. The latter two are on the small, wooded hills on either side of the western half of the facility. The offshore rig is unique and has no drilling tower. Instead, there are some indestructible silos, some Fuel Depots, SAM sites, and some indestructible chimneys. The rig holds at least one laboratory.

There are two laboratories, small and round with big fans on the roof. These laboratories are featured in the mission Chemical Heist. You must destroy the fans to get into the laboratories and steal the required items. The labs are always accessible, unless the doors were not opened from the inside during the mission. There is one sentry gun in each lab. There are biohazard warning symbols on the rig.

The lake is one of three frozen lakes in Panau. There is also one smaller one in the area, but it can be harder to find. The last one is found at Kastelo Singa.

Normally the elites at the place carry Assault Rifles, Machine Guns, Shotguns, and rarely, Submachine Guns . On the two laboratory roofs, one can see one or two elites carrying pistols. This is not something a trained elite soldier would wield. However, you should still be careful around them, because the pistols, oddly, seem to deal more damage than a regular one.

The existence of this laboratory in a former oil/gas rig proved that a small oil and gas reservoir existed under the lake, so the president insisted that a special drilling rig be built in the frozen lake. However, the reservoir went empty after only a couple of years, so the rig was converted into a chemical research facility, and the rest of the buildings were constructed.

The location is a chemical research facility, used to create chemicals for the Military that can be used for chemical warfare.

In the Berawan Besar Mountains, at a frozen lake. The base is also located south of the Snow Peak.

The oil rig in the lake. 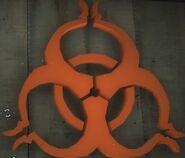 A biohazard symbol, located on the rig in the lake. It differs from the real biohazard symbol a little. The little most outward components don't exist on the real symbol and the small hole in the center should also be bigger.
Add a photo to this gallery

Retrieved from "https://justcause.fandom.com/wiki/Gunung_Tasik?oldid=162063"
Community content is available under CC-BY-SA unless otherwise noted.