Head of State is a Roaches faction mission in Just Cause 2. For a list of heads of state in the Just Cause game series see: Category:Heads of State.

A buddy of Razak's, "Sushi" Tom Yee, is in a bit of a funk. It seems that the government has torn down his business in Kota Pantai Kuala and used the spot to erect one of the many statues of Baby Panay seen throughout Panau. Razak is tired of listening to his friend whine and wants you to bring the head of Baby Panay to Sushi. Well, the statue's head, anyway. 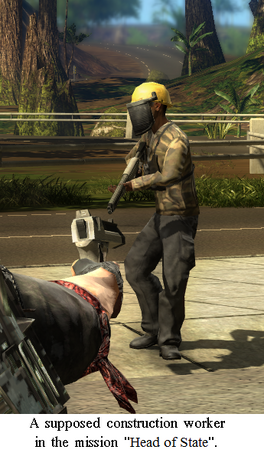 The provided weapon (Rocket Launcher) isn't necessary at all. If everything goes right, you won't have to fire a single shot from any hand held weapon.

The Panau Military has a bit of a presence in this town, guarding their beloved Baby Panay. They have even brought a pair of GV-104 Razorback armored cars... how thoughtful.

Grapple your way to the statue and get in the nearest armored car. Take your time and kill all the nearest soldiers. But note that taking too much time will give them time to call for support.

You will get heavy resistance in the form of construction workers and the military, so head straight to the coastal mansion by the mouth of the river to the east. Do not take any shortcuts, stick to the road, otherwise the head will likely become stuck. The hardest thing is keeping the armored car moving forward since your momentum will be lost frequently while dealing with traffic and military. The drop off point is the red arrow at the mansions front door. It will turn green when you drive into it.

After the mission, if you go look behind the house, Sushi will have put the head of Baby Panay to good use - as a decoration for his fountain. The head occasionally 'cries' (water gushes from its eyes). He doesn't get to enjoy it for long: The mansion is also now under the control of the military. But you can fix that, by taking that settlement over. If you already didn't do so before hand.

Retrieved from "https://justcause.fandom.com/wiki/Head_of_State?oldid=157574"
Community content is available under CC-BY-SA unless otherwise noted.