The vast majority of vehicles that the player (as Rico) can control in the Just Cause game series have to be stolen. This article is about vehicle hi-jacking techniques.

In order to hi-jack an occupied vehicle, Rico has to eject the unfortunate driver. If this action is noticed by the police, or the military, Heat will be gained. The level of heat depends on whether it's a civilian, or military vehicle.

Hi-jacking a vehicle can get you to your next destination; out of an inconvenient situation; or to the completion of a mission objective.

Quote from the Just Cause manual:

A number of different vehicles have been stolen over the last few months indicating a sharp rise in hijacking related crimes.

A police spokesperson said "It's very difficult for the people of San Esperito to protect themselves from these crimes, as the perpetrators often carry weapons."

Eye witness accounts claim that the thieves simply step up to the vehicles they wish to steal, press E and then get in and drive off.

The simplicity of this was cited as the main reason for the sharp increase in the number of cases as well as the need of young people for thrill seeking adventure.

Extra police have been put on patrol to try and combat these crimes.

"Don't take no passengers!" - Rico Rodriguez, while tossing a civilian driver out of their moving car in Just Cause 2. "Open sesame." - Rico when blowing a locked door open on an armored vehicle in Just Cause 3. "Good day for a swim." - Rico, when hijacking a boat and throwing the owner overboard in JC3.

Hi-jacking moving vehicles is a little easier in Just Cause (1). Note that when you enter a car from the passenger side and don't touch the controls, you can have a ride as a passenger. Also, a car door is usually ripped off the vehicle when it gets hijacked.

Very unrealistically, when you steal a military vehicle when all of its occupants exit, assuming you don't have heat, they will leave you alone.

There's a few vehicles in missions that can not be hijacked and have to be destroyed as a mission objective.

Default buttons for entering a vehicle

Stand on the road and wait until the car door is next to Rico. Make sure you don't stand in front of the car, or you will be killed. When the car door is close enough to Rico, you can enter the car, no matter how fast it's driving.

This method can also be used to obtain a boat, if Rico is swimming. Boats don't want to hit Rico, so they usually turn away, but it can be done.

If you encounter any Ballard series armored vehicles, or Harland series armoured vehicles during a Liberation sidemission, stay away from them! Make sure that you're never in the area where the turret is pointing and stay far away from the vehicles front end. They will intentionally run you over, killing Rico. The only safe way to approach them is from the side.

Stealing moving vehicles, especially the military vehicles, has been made much more difficult in Just Cause 2. But the Grappler has also been upgraded, to counter those difficulties.

Default buttons for entering a vehicle

Civilian vehicles can be taken the same way as Just Cause (1) vehicles. Simply by being close enough to the vehicle and pressing the right button at the right time.

How you get close enough to the vehicle, is entirely up to you.

Performing a stunt jump to the roof (stunt position) of any vehicle, puts you in position to take control of the vehicle.

When grappling or stunt jumping to a motorcycle, you will land in the seat of the moving vehicle and immediately displace the driver in an instant hi-jack, no matter if it's a soldier or Civilian.

On most vehicles, if you press the hijack/enter button while standing in front of the passenger side, you will get in through the passenger door and sit in the seat. After a few seconds, the driver will stop the vehicle and run away.

Civilian airplanes (seen flying) can be hijacked by flying another plane close by, then performing a stunt jump and grapling to the plane. Then just press the enter button. There is no quick time event when hijacking a civilian plane. This really isn't necessary because doing this would require a plane itself thus defeating the purpose, unless you are hijacking a faster plane. This however could be more challenging as your plane would have to keep up with the faster one.

When the occupant of the vehicle is a soldier, attempting to hijack the vehicle will trigger a "Quicktime event" requiring you to hit a sequence of three keys/buttons before the timer runs out. Hitting the wrong button more than once will result in Rico getting punched/kicked. This will reduce Ricos health a little, but you can try again. If you don't try again, or if you have too few health, it's possible to get killed. Successfully completing the sequence will cause Rico to eject the soldier and enter the vehicle.

To hijack a helicopter in JC2 (in this case a UH-10 Chippewa), Rico has to first Grapple to it and then shoot off the soldier in the passenger seat. Picture taken above the Rajang river.

To be able to shoot off the soldier in the passenger seat, Rico must first get to this position. Picture taken at Bandar Baru Nipah. 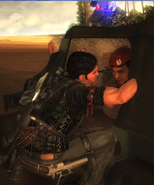 The final part of hijacking a military helicopter is a quick-time event where Rico fights the pilot and throws him out.
Add a photo to this gallery

Just Cause 3 has again upgraded the Grappler, but for the purposes of hijacking it works the same.

In this game stealing vehicles is the easiest, because the quick-time event has been removed. Now stealing military vehicles is again as easy as stealing a civilian vehicle. Just grapple yourself onto the vehicle (into the Stunt position) and from there press the correct button to enter the vehicle.

Parked military vehicles and a parked Stadt-Tresor ST 8530 may have their doors locked, so Rico will plant a small explosive on the lock to blow the door open. These explosives never run out and the player has no control over them. (Instead the player is given the GE-64 explosives.) If a military vehicle has already been hijacked and Rico has exited the vehicle, he may still have to blow the door open to re-enter it, but this will only have to be done once.

Everything works the same as in JC3, except that there are no more locked vehicles.

This means that in order to enter any vehicle, regardless of weather it is occupied, Rico just has to stand close enough to the door, or be on its roof (stunt position).

Hijacking a moving vehicle is the easiest by grappling ones self to the vehicle and then entering from the roof.

Retrieved from "https://justcause.fandom.com/wiki/Hijacking?oldid=153182"
Community content is available under CC-BY-SA unless otherwise noted.