The Holdt R4 Pitbulls are weapons in Just Cause (1).

They are two small silver coloured revolvers, which are always carried by Rico, even after dying. The Pitbulls are available from the start of the game.

Looking closely, they have small what appear to be grenade launchers under the barrels. These do not function in the game.

They are very similar to the Smith & Wesson Model 29, presumably modified by the Agency.

They have infinite reserve ammunition, yet only 6 bullets in a cylinder, although because they are always dual wielded, they behave the same way as a single pistol with a magazine of 12. They are not hugely powerful compared to the other weapons available to Rico, although can be fired relatively rapidly.

Rico and Tom Sheldon inside the Pocumtuck Nomad during the mission The San Esperito Connection. Note the Holdt R4 Pitbulls on Rico

At the Hidden temple at Isla Maria Dolorosa. 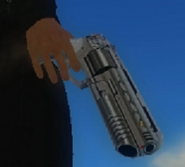 The HUD icon.
Add a photo to this gallery
Retrieved from "https://justcause.fandom.com/wiki/Holdt_R4_Pitbulls?oldid=132420"
Community content is available under CC-BY-SA unless otherwise noted.