The Hot air balloon is an aircraft in Just Cause 2.

It maneuvers and handles just like a helicopter, but it's much much slower. It's rumored to be able to move about 400 meters per minute.

To use the balloon, simply shoot the 4 sandbags on each side, or if the player doesn't want to use any ammo, melee them and jump into the basket. Keep tapping the "interact" button/key to start the burner and keep the balloon in the air. To move the balloon, move Rico to either side of the basket, shifting his weight onto that side, thus moving the balloon.

This balloon is indestructible to all guns and explosives and blows up any planes that fly into it. It floats on water.

The hot air balloon can only be found near Panau City, at about X:7330; Y:16080. It's south of Panau International Airport, just off the motorway/highway. There's an armor part near it as well. 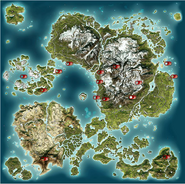 The hot air balloon is marked by the "?". See Maps for more info.
Add a photo to this gallery

The followng 2 videos were made with Modifications:

Retrieved from "https://justcause.fandom.com/wiki/Hot_air_balloon?oldid=157577"
Community content is available under CC-BY-SA unless otherwise noted.