The Huerta SPA Ocelot is a small passenger plane in Just Cause (1).

It can be found at most airports, such as the one in Provincia Aguilar. It is a single-engine high wing general-aviation type aircraft, taking a very similar appearance to the Cessna 177 Cardinal. Like the real-world inspiration, the plane has no weapons. Although it has 2 seats, you can never have a passenger. Behind the front seats is a platform which could be used as seats or to store cargo. The stunt position for this vehicle is on top of the wing, above the passenger cabin.

Although this is mainly a civilian aircraft, it has been spotted to be serving factions as well. These versions are never seen in use and can be seen at civilian airfields.

Both of them can be assumed to be meant for only reconnaissance purposes, as they are still unarmed.

There's also a broken (crashed) version of this plane, which usually has a collectable item next to it and a more rugged doorless and windowless civilian version. See also Vehicle wrecks.

View of the village were is located.

Guerrilla aircraft: on the left is a Delta 5H4 Boxhead, in the middle is the "Huerta SPA Ocelot", and on the right is a Delta MAH-15 Chimaera, together.
Add a photo to this gallery

On the fronts is parqued "The unique version" on the background is parqued the normal version.

Inside view.
Add a photo to this gallery

Interior view.
Add a photo to this gallery 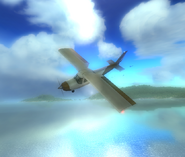 The Propeller.
Add a photo to this gallery

This variant is unique, spawning only during Field of Dreams. It is equipped with four containers of toxic waste.

Spraying in progress.
Add a photo to this gallery

A crashed version at a beach, west south-west of Mendoza International Airport.

A crashed version on Isla Alegre to the right of Guerrilla 14 "Camp Lighthouse".

Both the doorless and the regular civilian variants. The vehicle in the foreground is an MV.

A crashed version somewhere in Provincia Quesada. The helicopter is a unmarked Jackson Z-19 Skreemer.

Somewhere in La Perdida during Broadcast News.
Add a photo to this gallery

This video shows the plane from the civilian airfield on Provincia de la Cruz.

Retrieved from "https://justcause.fandom.com/wiki/Huerta_SPA_Ocelot?oldid=158378"
Community content is available under CC-BY-SA unless otherwise noted.